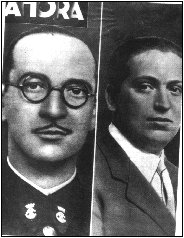 At 9.30pm on 12th July 1936, José Castillo – a Spanish lieutenant in the governing Republic’s special police Guardia de Asalto and a high-profile anti-fascist – left his house in Madrid to walk to work. When he reached the corner, a gang of Falangists, Spain’s principal fascist movement, shot and killed him. The murder of Lt.  Castillo was to the Spanish Civil War what the assassination of Archduke Franz Ferdinand was to World War One – the spark that ignited a long-festering powder keg. This one murder would set in motion an unstoppable chain reaction that heralded the onset of a savage three-year national conflict, and cataclysmically altered the course of the twentieth century.

News of Castillo’s murder spread like wildfire, his outraged colleagues determined to seek immediate retribution. Less than six hours later, a police van arrived at the nearby home of monarchist José Calvo Sotelo, the political leader of one of the main Nationalist opposition parties. Forced out of bed and into the police van, one of the guards shot Calvo Sotelo in the back of the neck. His body was dumped at a municipal undertakers.

A rising wave of violence and terror had cut a swath across turbulent Spain throughout 1936 as Republicans and Nationalists jockeyed for position, compounded by the threat of a Communist revolution. But of all the many political murders in the first half of the year, it was these two that accelerated the impending disaster. The reprisal assassination of Calvo Sotelo by a government police guard provided the perfect public justification for the Nationalists’ planned military coup – which, within hours of the murder, was given the final go-ahead. And just five days later in Morocco, General Francisco Franco signalled the start of the uprising.

The Spanish Civil War has featured numerous times in the annals of On This Deity with good reason. We need look no further than the bloody streets of Madrid and Barcelona for manifest representations of virtually every twentieth-century political ideology: backwards-looking reactionaries; self-serving monarchists; blundering Republicans; two-timing Communists; monolithically evil Fascists; naively idealistic Anarchists. And, as the direct precursor of World War 2 – an unimpeded “dry run” for Hitler’s technology that sealed the Axis Pact. The Spanish Civil War begets an endless stream of monumental “what ifs”, namely: would World War II have happened had Hitler not been emboldened by his Spanish Adventure?

One Response to 12th July 1936 – the Murder of Jose Castillo