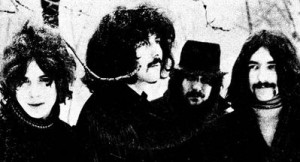 Today we celebrate the release, nay, escape of Black Sabbath’s self-titled debut LP, forty-nine years ago, with which the initial re-paganising of late-50s Whitey – with its fuse lit by African-American rock’n’rollers – was crystallised forever by four psychedelicized Anglo-Saxon youths on a one-way ticket back to the Norse Myths: Altamont, Manson, Ragnarok, Domesday. BLACK SABBATH took Blue Cheer’s awe inspiring and pulverizing VINCEBUS ERUPTUM, and to it they added T H A T note: the ‘Satanic’ note. Bom… Bair… Büüm!!! Nobody played that note. Not Led Zeppelin for sure – too gauche even for Jimmy Page. Cannily clad by their record company in a self-consciously Wiccan outer package more fustily archaic and holy than modern ‘secular’ postwar New Testaments could ever have dared to be, and possessed at its centre of an enormous inverted cross, BLACK SABBATH summoned the ears of the Hippie Generation’s little brothers and dragged them jerking into the cold light of the 1970s. The Downer had begun.