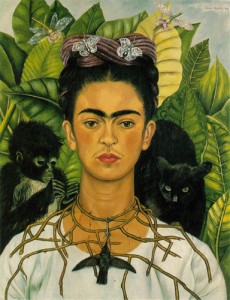 “They thought I was a Surrealist, but I wasn’t. I never painted dreams. I painted my own reality.”

…and Frida’s reality was a lifetime of extreme physical pain and tortuous suffering, punctuated with a tempestuous emotional turbulence.

Artist Frida Kahlo was born in 1907, the daughter of Hungarian Jewish father and indigenous Mexican mother. She grew up in Mexico City at a time when Mexicans were beginning to take great pride in their native culture and traditions. Frida was proud of her pre-Columbian heritage and wore local costume, including long embroidered skirts in bright colours, big silver earrings, flowers, and jewellery from the folk tradition. Her distinctive look gave her a brand, yet averted attention from her tiny, weak, disabled body.

Aged 6 she contracted polio which left her with a stunted leg and foot. Despite this she studied hard at school to fulfil her ambition of becoming a doctor. On 17 September 1925 the bus she was travelling home from school on collided with a tram. Frida’s wounds were severe but somehow, despite the loss of blood, the broken spine, the shattered pelvis and the spike which impaled her through her vagina, she survived. She was only 18.

Her recovery to some form of functioning health was slow. Her father, who was a photographer and painted for pleasure, rigged up an easel, mirror and a palette for her in bed and she took up painting to “combat the boredom and pain”. This was the beginning of Frida’s exceptional artistic journey.

She started as she was to continue; with self-portraits. But she shows us so much more than just what she looked like and what she was wearing. Frida shows us her inner world, which is visceral, intense and often doesn’t make easy viewing. Other people perhaps write books or poetry or see a counsellor to express their inner turmoil. Frida painted it. There are paintings of pain, torture, betrayal, lust, love, loss, disappointment and death. She is honest about herself in a way that perhaps no other artist had ever been. Frida’s life and work are indivisible.

Quite apart from the more than 30 operations she had to endure to manage her poor physical health, she was often emotionally stressed. Aged 22 she married 42-year-old Diego Rivera who was already an established artist, a painter of political murals, an atheist and a revolutionary communist. He recognised Frida’s talent and used his influence and contacts to promote his wife’s work. But their firey personalities meant their relationship was fraught with difficulty. Frida and Diego were both active communists, so when Leon Trotsky came to Mexico to escape Stalin in 1937 they offered him refuge in their home. Diego, himself a serial womaniser, felt the pain of betrayal he’d so often inflicted on Frida, when she had an affair with Trotsky. Frida and Diego divorced in 1939, but remarried the following year. A classic case of can’t live with, can’t live without.

“I have been cheated-on more times than I can count.”

Frida smoked cigars, swore like a navvy, drank tequila to excess and took drugs – both prescribed and recreational – sometimes all at the same time. It was her way of coping with the shit that life threw at her. The physical pain was agonising, as were Diego’s affairs, but perhaps what hurt her most were the three miscarriages. She painted those too.

Culturally steeped in the visual traditions of the Catholic church, a powerful force in Mexican society, it’s not surprising that Frida’s self-portraits are strewn with references and symbols, including Frida’s own depiction of herself as the Virgin Mary. But Frida is no sweet-faced mother-of-god. Frida is a powerful Everywoman. The universal themes that women understand are all there; the sacrifice, the selflessless, the blood, the sometimes futile attempts to take control of our lives. It’s no wonder that women all over the world respond so passionately to Frida’s work.

“Feet…what do I need them for if I have wings to fly.”

By now she was addicted to painkillers and bed-ridden much of the time. But her burning desire to paint was undiminished; she completed another 15 in her last two years. She attended the opening of her final exhibition pushed along in her bed.

On Tuesday 13 July 1954, Frida died of what may have been a deliberate overdose in the Blue House where she had been born 47 years earlier. Diego couldn’t accept she had gone; a doctor had to open one of her veins to show him that she did not bleed. “I don’t want to be buried. I have spent too much time lying down…just burn it!”

At her funeral mourners sang political songs. As Diego and Frida’s family lifted her body from the coffin, a blast of heat from the furnace caught it; mourners saw her body jerk bolt upright and her hair blaze like a halo as the incinerator doors closed.

Frida’s total output was small: only 143 paintings, but 55 of them are self-portraits. She never set out to be a pioneering feminist, but in recording and exposing the passions and truths of her life, that is her legacy. That a diminutive, crippled, Latino woman was able to make her mark as a great artist is a measure of the value she placed on herself. Women today, whether they are artists (like Britain’s best known woman artist* Tracey Emin who learned much from Frida) or not, would do well to learn from Frida’s priceless example.

Her face now appears on the Mexican 500 peso note. Even for a communist like Frida, that’s worth something.

* apologies for using this loathsome and patronising expression