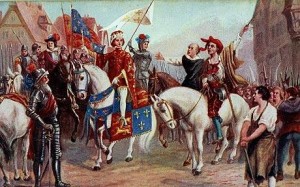 On this day in 1381, 20,000 peasants and townsmen from Kent and Essex stormed into London, led by John Ball an itinerant priest and Wat Tyler a craftsman. They had come to present the young King Richard II with a set of demands that amounted to the abolition of serfdom, and for two days their rebel forces were in control of the capital.  Ultimately the rebellion was to be betrayed and crushed but their ideas inspired later generations of radicals as the ‘first planting of the tree of liberty’.

Under the feudal system that had operated in England since the Norman Conquest, the life of a serf was one of drudgery and oppression. The majority of the population lived in the countryside at the sufferance of landowners to whom they paid rent in the form of unpaid labour and military service. A small amount of their produce was their own, but could only be milled or processed if they made payments to the landowner. Theoretically a serf could buy himself out of his bondage but the opportunities for any sort of paid labour were severely limited. A rigid social structure was enforced by a legal code that stipulated what clothes a serf could wear and what food could be eaten, but most importantly of all, forbade them to leave their villages.

There was no strong centralised apparatus to enforce this in the modern sense but the feudal state was a three-headed creature: The Church – often a landowner as well – provided ideological legitimacy; the Nobles acted as a form of privatised law enforcement; and the Crown sat in the shadows behind it all. Consequently whilst peasant resentment was aimed at the church and landowners, the king was generally seen as some sort of champion of justice for the common people – an illusion was ultimately to prove the undoing of the revolt.

Ironically it was the Black Death of 1348-9 – the pandemic that killed off a third of the total population – that created the cracks in the system that made rebellion possible. Wide-scale depopulation and a resulting chronic labour shortage gave serfs and craftsmen an opportunity to earn higher wages. An embryonic urban working class was created by peasants leaving their villages and taking up trades in the towns, and there were the first glimpses of a new kind of economic system springing up around the wool trade.

The landowners were rattled by this threat to the social order.  In response a draconian Statue Of Labourers was introduced in 1351 that reinforced the restrictions on serfs and most significantly limited wage levels to pre-plague levels. As a result the next thirty years saw social conflict with peasants, craftsman and merchants forced into an alliance by laws that penalised both worker and master who agreed to higher wages than those specified. At the same time the life of the medieval court, based on lavish conspicuous consumption made increasing demands in terms of taxation. In 1381 the uncle of the teenage king and the effective power behind the throne, John Of Gaunt, raised a poll tax, a flat levy on every person over the age of 15. It was the third such levy in a short number of years, and was to prove the catalyst for rebellion across South Eastern England.

Inspired by hatred of the unfair tax, and regarding the virtual-regent John Of Gaunt as a hate figure the ‘evil councillor’ who had abused the powers of the Crown, crowds of peasants and townspeople gathered in Essex and Kent. Leaders came to the fore although little is still known about their backgrounds or ideology: Wat Tyler – an independent atrtisan with some military experience –  was the man of action, whilst John Ball – a wandering preacher who may have been influenced by the proto-Protestant Lollard sect –  provided ideological leadership. Ball had a biblical view of social justice as the divinely ordained natural order, preaching: “In the beginning all men were created equal; servitude of man to man was introduced by the unjust dealings of the wicked and is contrary to God’s will. For if God had intended some to be serfs and others lords, He would have made a distinction between them at the beginning.” However he was not a revolutionary in any modern sense – he sought recourse for injustices by corrupt nobles and churchmen from the king as God’s appointed judge on earth.

Having gathered at Blackheath and elected Wat Tyler as their leader the rebels march on London to seek a meeting with the king to present their petition. Along the way they destroyed property – although their actions were not indiscriminate; the main target was primarily the destruction of manorial rolls – documents that recorded serfs’ obligations. When they got to London, the homes of particularly hated figures where singled out for looting and destruction – including John Of Gaunt’s Savoy palace. Seeking to keep fighting away from the capital, and with limited military forces available, the young king arranged to meet the rebels at Mile End. There he agreed to the demands to give serfs the right to buy and sell goods and labour, and to provide a general pardon to all rebels.

However this virtual abolition of serfdom was only a cynical attempt to play for time whilst the king actually gathered his forces. At a second private meeting on the 15th June, Wat Tyler was murdered by the Lord Mayor of London William Walworth. Unaware of this, the rebels agreed to disperse and leave London. When they had done so the king immediately renounced his previous promises and having now gathered an army, over the next two weeks defeated the remaining rebel forces in Hertfordshire, Essex and Kent. A month later John Ball was captured and then hanged, drawn and quartered.

Although the rebellion was defeated, feudalism was in terminal decline and by the start of 15th Century had in effect all but been abolished. The costly French  wars played their part in this, as did the emergence of trade and manufacture. But John Ball’s rallying cry ‘When Adam delved and Eve span – Who was then the gentleman?’ endured to inspire later radicals of the English Civil Wars and Victorian socialists. For six hundred years no government would attempt to again introduce a flat-rate poll tax. When she did so in the late 1980’s, Thatcher, like John Of Gaunt before her, would fatally underestimate the anger she unleashed.

This entry was posted in Dissent, Heroes, Revolution. Bookmark the permalink.