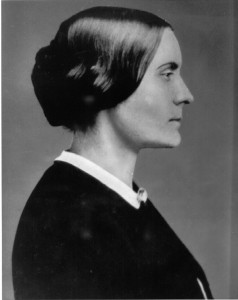 Today we pay tribute to a woman whose very name is synonymous with women’s suffrage – the legendary Susan B. Anthony. Although there are several other luminaries whose pioneering efforts heralded that extraordinary first wave of female emancipation,  it is Susan B. Anthony who has gone down in history as the summum bonum of the American women’s rights movement. She is the only suffragist guaranteed to be mentioned by name in American schoolchildren’s textbooks; in 1979 hers was the first non-allegorical image of a woman to appear on U.S. currency; and even the 19th Amendment itself is commonly referred to as the “Anthony Amendment”. But her iconic status and “acceptable” place in history belies her wholly radical reality.

Born in an age when women were not allowed to own property, study, speak in public or vote, Susan attended her first women’s rights convention in 1852 and thereafter dedicated the remainder of her life to the cause. An organisational genius, her canvassing plan is still used today by grassroots organisations. A tireless campaigner, Susan travelled across the nation crusading for the vote – delivering between 75 and 100 speeches every year for fifty years. With her great friend and ally Elizabeth Cady Stanton, she founded and published the weekly newspaper The Revolution with its inspired masthead: “Men, their rights, and nothing more; women, their rights, and nothing less.” She appeared before every congress from 1869 to 1906 to lobby for passage of the suffrage amendment that she and Elizabeth drafted. Between 1881 and 1885 Susan, Elizabeth and Matilda Joslin Gage collaborated on and published the monumental History of Woman Suffrage. Anticipating the “Ban the Bra” movement by some 120 years, she cast off her constricting corset and was one of the original “Bloomer Girls”. She co-founded the most influential national suffrage organisation, serving as vice-president and then president until she stepped down at the age of 80. And throughout her fifty years of relentless activism, she was all the while subjected to ridicule, opposition and abuse – to which she responded:

“Cautious, careful people always casting about to preserve their reputation or social standards never can bring about reform. Those who are really in earnest are willing to be anything or nothing in the world’s estimation, and publicly and privately, in season and out, avow their sympathies with despised ideas and their advocates, and bear the consequences.”

But throughout the course of a lifetime of memorable achievements, the most unforgettable was without doubt her audacious challenge of the U.S. Constitution. On November 1st 1872, Susan and three of her sisters marched into a Rochester voting registration centre and read aloud the recently adopted 14th Amendment to the three male electoral registrars, pointing out that nowhere did it state that these privileges were restricted to men. And in accordance with the amendment’s citizenship provision, the women demanded their constitutional right to register. The dumbstruck registrars were no match for this female firebrand and acquiesced. Four days later, Susan B. Anthony stepped into a voting booth and marked her ballot in the 1872 presidential election. This inspired act of manipulation and defiance resulted in her arrest and the infamous case of the United States v. Susan B. Anthony. It would also be the only occasion in her life that she would vote. Thirty-eight gruelling years later, on her 86th birthday, the struggle for women’s suffrage had still not succeeded – but the indefatigable Susan said to her supporters: “Failure is impossible.” She died one month later.

Susan B. Anthony’s persistence, indomitable spirit and unwavering dedication effected a change that she did not live to see; American women would not be granted the right to vote for a further fourteen years after her death. But her legacy survives in the daily lives of millions of women who, today, have a voice. She was a cunning, tenacious and formidable warrior to whom we owe an incalculable debt.