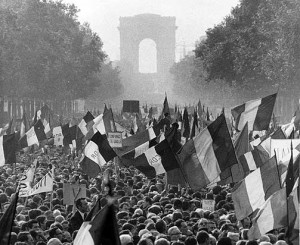 One million march against French authoritarianism: Paris, May 1968

No other city is more synonymous with revolution than Paris. Its citizens turned the world upside down in 1789, 1830, 1848 and 1871. And on this day in May 1968, one million Parisians once again took to the streets in revolt. A week later, eleven million workers – two-thirds of the French workforce – downed tools in what was the largest-ever general strike of an industrial nation. It was the year that “rocked the world”, led by an extraordinary tidal wave of student movements across America and Europe. But nowhere else in 1968 but Paris did the workers rise up at the same time as the students. The resulting convergence of labour and student revolts – known collectively and historically as “May 1968” – brought France to a virtual standstill, paralysed its economy and very, very nearly toppled the mighty de Gaulle government.

This national mass uprising came without warning in a country by no means ripe for revolution. Wages were relatively high, and the politically wary postwar French were content to delegate decisions to their great Resistance hero, Charles de Gaulle. Rather, a minor spark was needlessly fueled by a series of arrogant government miscalculations.

Four months earlier, at the Nanterre campus of the University of Paris, a small group of students began calling for greater visitation privileges. Taking inspiration from the worldwide student movement and the Situationist International, the emphasis of the protests soon extended from educational reforms to the greater ills of la société bloquée.

When the Nanterre administration shut down the campus on 22nd March following student conflicts, the protest shifted to the hallowed halls of the Sorbonne. Young people from all over Paris converged upon the medieval university for meetings, demonstrations and sit-ins. Buildings were occupied. Situationist-inspired slogans emblazoned the city.

On 3rd May, the suspicious President de Gaulle, fearing a socialist conspiracy, ordered his armed special police force – the ominously named Companies for Republican Security – to evacuate the Sorbonne. Heavy-handed tactics resulted in 100 injuries, 596 arrests, the closing of the Sorbonne for an indeterminate time and the beginning of a process of escalation that would continue through the entire month. One week later, a new round of protests and battles with police shook the Latin Quarter as students threw up barricades of paving stones and overturned cars. When the tear gas cleared, there were 367 people hospitalised and 468 people arrested.

The police violence of 10th May initiated an unprecedented outpouring of sympathy from the workers of France as the major trade unions called for a general strike on the 13th to protest the state’s repression of the students. The one-million-strong turnout astonished everyone. The following day, workers at the Sud-Aviation factory in Nantes, acting outside union directives, spontaneously occupied their factory. Coal miners, dockers, postal and rail workers, teachers and air traffic controllers followed suit. By 20th May, the strike had spread to eleven million workers, de Gaulle fled the country – and France was literally closed for business. The social theorist Raymond Aron observed in late May that most people in Paris believed that government no longer existed and that anything was possible.

So how was defeat snatched from the jaws of near victory?

The extraordinary events of May surpassed the students’ expectations. Ill-prepared to seize the moment, their visionary revolution was usurped by the pedestrian demands of the workers. Enough labour concessions and compromises were hastily agreed before de Gaulle regrouped and threatened a military-backed state of emergency. The trade unions and the French Communist Party began to fear that the revolution might slip from their hands and took steps to reassert their control. By mid-June, against the objections of the best-known student leaders, the workers capitulated. Astonishingly, de Gaulle would survive the next general election with an increased majority, proving Eugene Debs assertion: “The people can have anything they want, the only problem is they do not want anything.”

Yes, a less rigid France would eventually emerge after the events of May 1968. But it was not the France that the students had dared to imagine…

The liberation of humanity is all or nothing.
You will end up dying of comfort.
All power corrupts. Absolute power corrupts absolutely.
Going through the motions kills the emotions.
Commodities are the opium of the people.
We will have good masters as soon as everyone is their own.
The future will only contain what we put into it now.
Those who make revolutions halfway only dig their own graves.
– Paris May 1968 Graffiti