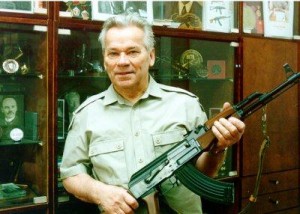 On the occasion of its semi-centennial, Mikhail Kalashnikov posed with an AK-47 in front of the Order of Lenin. In true Communist fashion, Kalashnikov never received a ruble for his revolutionary invention.

On this day in 1949, Mikhail Kalashnikov completed his development of the AK-47 semi-automatic assault rifle – an invention so reliable, so easy and inexpensive to manufacture and so serviceable that the way was opened up for post-war freedom fighters finally to demand a say in the manner in which their countries would be governed.

Let us not linger on the so-called qualities of this murderous weapon longer than we need to, but just long enough to address this undeniable quote from the twentieth-century writer and historian, Gerald W. Johnson:

“We are reluctant to admit that we owe our liberties to men of a type that today we hate and fear – unruly men, disturbers of the peace, men who resent and denounce what Whitman called ‘the insolence of elected persons’ – in a word, free men.”