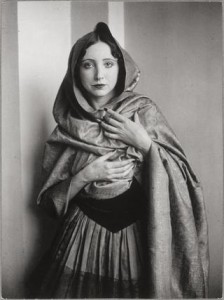 The brilliant and beautiful Anaïs Nin

Today we pay tribute to Anaïs Nin – one of the most important writers of the twentieth century – who died on this day in 1977. Brilliant, beautiful, seductive, promiscuous, flamboyant, provocative, fearless, Anaïs was and remains a source of inspiration for all dreamers and schemers who would defy convention – her daring, experimental life was, in itself, an inspiring drama of non-conformity. An early practitioner of psychoanalysis, artists’ model, Spanish dancer, and underground film actress, Anaïs moved between continents, recognised and nurtured several future artistic luminaries, took her lovers from among the most brilliant men of her time whilst remaining married to the same man from the age of 20 (later in her life, she would manage to maintain not one but two remarkably loyal marriages simultaneously). Her romantic and intellectual relationship with Henry Miller, with its mutual enrichment and pollination of ideas, gave us one of the most legendary and fruitful literary partnerships. And throughout it all, Anaïs wrote – with prolificacy, devotion, courage and a hitherto unknown poetic feminine voice. But despite a multitude of short stories, literary criticism and commentary, she struggled to find publishers in a male-dominated era and was largely ignored until the 1960s. And when she finally achieved widespread recognition, it was with the work she never intended to publish.

On a ship bound for New York from Barcelona in 1914, eleven-year-old Anaïs began writing the journal that Henry Miller predicted would someday “take its place beside the revelations of St. Augustine, Petronius, Abelard, Rousseau, Proust, and others.” Primarily set in France and the USA, and spanning the historic period of both world wars, the diaries of Anaïs Nin chronicle the rich life and times of an avant-gardist as she embarked on relationships with artists both famous and unknown, struggled with publishers, exorcised the dark demons of her past and always, always, always strove toward artistic success, self-fulfilment and freedom. Those closest to her often urged her to abandon her journal, believing it a hindrance to her career as a fiction writer; Anaïs herself likened her obsessive chronicling to a drug addiction. But while there would be the occasional absence of entries, and time throughout the 1940s in particular when – feeling enslaved – she attempted to break away, she always returned to where her pen felt most at home. After long deliberation, Anaïs at last accepted that her journals were in fact her Major Work. She embarked upon the monumental task of editing the 150 volumes of some 250,000 handwritten pages – an extraordinary journey of self-discovery that represented fifty sustained years of rigorous, devotional work. Volume One of The Diary of Anaïs Nin was published in 1966 to immediate success, propelling her at long last to fame. Of even greater significance, the Diary was taken up by the bourgeoning Women’s Movement as a candid and eloquent document of the life of a Free Woman, challenging conventionally-defined gender roles and offering a bold blueprint for emotional and sexual liberation.

With the publication of each subsequent volume, the Diaries became required reading for new generations of disenfranchised teenage girls searching for their own singular path. I was one such teenager. I first read Anaïs Nin when I was 15 and, like so many other alienated young girls, the impact was both immediate and life-changing. Here was a woman who had devoted the whole of her life to art and beauty on her own entirely feminine terms. And that was the key. However inspiring Patti Smith was to my teenage self, she was navigating trails that men had blazed before her. What Anaïs represented was something else altogether. Not only did she provide the most extensive record of the inner life of the female artist, but she did so with a profound understanding of the gift that such a feminine voice could bring to our time. No woman had ever done that before. She was the first. In her own words:

“I have lived out everything, and … contrary to most creative women of our time I have not imitated man, or become man … I represent, for other women too, the one who wanted to create with, by, and through her femininity.”

Young women today suffer enormously from a lack of identification with a heroic feminine figure. For sustaining a lifetime of fearless, feminine art, Anaïs Nin is a woman worthy of hero worship in its most positive aspects.