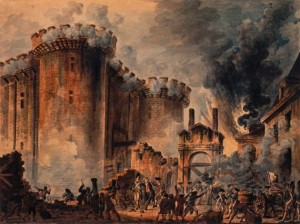 The Storming of the Bastille, by Jean-Pierre Houël

Today we celebrate, though not without a small note of reservation, the Storming of the Bastille in Paris on this day in 1789. Commemorated with a public holiday in France, Bastille Day has come to mark the beginning of The French Revolution. Of course, France has had a number of significant revolutions – notably the July Revolution of 1830 and the revolution in 1848 that gave rise to the Second Republic – but it is the one that began in 1789 and lasted a full decade that has earned the definite article. It is The French Revolution.

The Bastille (or Bastion de Saint-Antoine) was originally a fortress built in the 1370s – during the Hundred Years’ War – to protect eastern Paris. By the 17th century the expansion of the city meant the Bastille was no longer on the outskirts where it could serve as an effective fortification against attackers, and Louis XIII re-purposed it as a prison. For the next hundred and fifty years the Bastille provided French royalty with a secure facility into which political prisoners and social agitators could be thrown with little or no regard for legal due process. As such, in the eyes of many it soon came to represent the oppression of the monarchy and although it only contained seven prisoners on July 14th 1789, the Storming of the Bastille was a hugely symbolic act, demonstrating the rejection of arbitrary royal privilege by the people of Paris.

Although history has chosen to locate the start of The French Revolution on this day, the decision to storm the gates of the Bastille was not a spontaneous one taken in isolation. It was merely the first explosive outburst of a society in which anger and disillusionment had been brewing for some time. Indeed, the monarchy was well aware of this gathering storm and earlier that year, on May 5th, King Louis XVI convened the Estates-General for the first time in 175 years. This was an assembly of representatives of the three ‘Estates’ (the monarchy – the First Estate; the church – the Second Estate; the common people – the Third Estate) and it aimed to stave off public unrest by finding solutions to the severe economic and social problems facing France at the time.

However, the Estates-General soon collapsed with the Third Estate quickly realising they had little real power to affect change via this forum. It was essentially a talking shop aimed at providing the illusion of participation in the political process and so, on June 17th they broke from the discussions and formed the National Assembly. Although less dramatic that the Storming of the Bastille a month later, it could be argued that this was the first truly revolutionary act by Les Communes and set the course for the days, months and years to come.

During the following four weeks, the relationship between the First and Third Estates grew increasingly strained, with the Church – having carefully gauged which way the wind was blowing – reluctantly taking the side of the people. On June 20th the king placed guards around the building used by the fledgling National Assembly. Members of the Assembly, sensing the onset of confrontation, made their way to a nearby tennis court owned by Louis and convened a meeting there instead. While the formation of the National Assembly had been a contentious act, the oath sworn by the members on June 20th – which later became known as the Tennis Court Oath – was the first direct challenge to the authority of the monarch. The Oath consisted of several commitments and assertions; firstly that the Assembly would continue to meet despite royal prohibition; secondly that political power ultimately derived from the Third Estate; and thirdly that they would continue to oppose the monarchy until a national constitution had been drawn up which enshrined that basic principle.

It was the Tennis Court Oath that led to the direct confrontation between the First and Third Estates which boiled over on July 14th. For although Louis initially offered concessions and sought to defuse an increasingly tense situation, the defiant nature of the Oath inspired both revolutionaries and conservatives to action. On the one hand, the fact that the monarchy was openly rejected in such a manner made it easier for others to do so; on the other hand, conservative forces within the king’s court saw the Oath as evidence that their authority was being undermined and anarchy was lurking just around the corner.

A number of historians have suggested that Louis XVI was actually more liberal than many in his own court, and was prepared to meet many of the demands of the National Assembly. However, his son had died just two weeks prior to the Tennis Court Oath distracting him from matters of state and allowing more conservative elements within the First Estate to gain power. Which is why troops flying the Royal Standard began to arrive in Paris within days of the Oath. Many of these soldiers were foreign mercenaries as the loyalty of French troops to the monarchy had begun to waver, with orders to detain political opponents of Louis being ignored. Sporadic rioting began as a reaction to the presence of Swiss and German troops on the streets and despite royal assurances that no direct action would be taken against the National Assembly, the tension was mounting.

On July 11th, Louis XVI’s privy council dismissed the Minister of Finance, Jacques Necker, who was the staunchest ally of the Third Estate within government and who had been attempting to restructure the French economy in a manner favourable to them. This was the final straw for many, as it represented the complete disenfranchisement of the Third Estate, and by the morning of July 14th the stage had well and truly been set for The French Revolution.

So it was that a crowd of about 1,000 revolutionaries gathered at the gates of the Bastille demanding entry. Although there were only seven prisoners to be liberated (none of whom had any political significance), there was a far greater prize lurking within the walls of the old fortress. For as well as the symbolism of occupying that hated prison, the building was also being used as an armoury and contained almost 15,000kg of gunpowder… exactly the kind of cache that could kick-start a widespread revolution.

Although there were only a handful of defenders, they were better armed than the angry mob and what started as an attempt by the terrified guards to peacefully relinquish control of the prison turned into a battle. Almost 100 revolutionaries died that day with the loss of just one soldier, though a further eight were later executed for their part in the killing.

And so the Bastille fell, sparking a revolution that would last for the next ten years. A revolution that soared to the heights of the Declaration of the Rights of Man and of the Citizen, yet plumbed the depths of the savage Reign of Terror. A revolution that essentially heralded the end of feudalism in Europe, but which simultaneously ushered in the Napoleonic Wars and a new era of modern imperialism.

Which is why at this point, I must sound that small note of reservation mentioned in the first line. Although the Third Estate referred to themselves as ‘the commons’, in reality they represented the emerging capitalist class and not the common man… the peasantry. So although the masses would indeed join the fight, there is a sense in which – for much of the time at least – they were being manipulated and exploited by one social elite in their bid to replace another. Yes, The French Revolution saw a fundamental shift in European society with the downfall of feudalism. However, despite the high ideals outlined in the Declaration of the Rights of Man and of the Citizen, it was as much about securing the rights of Private Capital as it was about the Rights of Man.

And now, almost two and a quarter centuries later, the entrenched power of International Finance Capitalism and the tyranny of the “Free Market” are as much a legacy of those ten chaotic years at the end of the 18th century as are the UN Declaration of Human Rights and the spread of representative democracy. The French Revolution did not replace the rule of The King with the rule of The People. It merely replaced bloodlines with accumulated wealth. Which, if it’s a step in the right direction, can only be seen as a very small one. It’s a journey as yet incomplete. A job we need to finish. Without the wars and the reign of terror, if possible, but so long as an unaccountable elite controls the affairs of man, the ideals of Liberté, égalité, fraternité remain but a fleeting illusion.