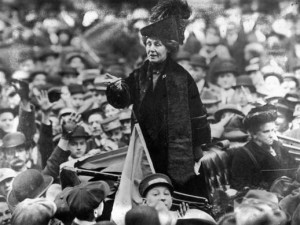 Today, we remember one of the most important British women of the 20th century who died 86 years ago today, aged 69.

And Brothers! You can thank Emmeline too: for freeing your mothers, sisters, aunts, wives and daughters from lifetimes of voiceless, subservient frustration, and enabling our talents, opinions, creativity and humanity to enrich our society.

Emmeline was born in Manchester in 1858, at the height of the industrial revolution. Both her parents were political activists, so as a child she learned, almost by osmosis, about social justice and the need to speak out. She read avidly; Uncle Tom’s Cabin and a History of the French Revolution made particularly deep impressions, and her mother’s subscription to the Women’s Suffrage Journal would profoundly shape her thoughts.

She understood that campaigning on a single issue ‘votes for women’ would enable women to change everything that mattered to them: sexual health and reproductive rights, employment law, inheritance law, fair pay.

“We want to help women…We want to gain for them all the rights and protection that laws can give them. And, above all, we want the good influence of women to tell to its greatest extent in the social and moral questions of the time. But we cannot do this unless we have the vote and are recognised as citizens and voices to be listened to.”

She began looking for an organisation she could join that reflected her passionate political views. An obvious choice was the National Society for Women’s Suffrage but she became frustrated with its party political affliations. The Parliament Street Society advocated votes only for single women; married women’s husbands could vote on their wives’ behalfs. Not good enough! Emmeline and her husband Richard founded the Women’s Franchise League. It was radical – it supported equal rights across the board – but too radical, and dissolved after only a year. She joined Keir Hardy’s newly created Independent Labour Party. After a visit to a workhouse to distribute food aid, in which she saw the appalling, insanitary and undignified conditions that many women and their children had to tolerate, she wrote:

“The condition of our sex is so deplorable that it is our duty to break the law in order to call attention to the reasons why we do.”

By 1903, now a widow with five children to support and a mountain of debt, Emmeline’s patience was wearing thin. Moderation and oratory weren’t getting her anywhere. Political parties weren’t putting votes for women at the top of their agendas. She’d have to do something herself.

Emmeline, her daughter Christabel and several others founded the Women’s Social and Political Union whose motto ‘Deeds not Words’ was a hint of the direct action and radical stance it would need to take to get the job done. The time for being lady-like was history. Hurrah!

Things turned militant. For voiceless, disenfranchised people there is no other way. Take note, Muamar Gaddafi, Bashir Al Assad and other monstrous control-freaks of your kind.

Initially the suffragists marched, rallied and petitioned. Then they set fire to property, sent letter bombs, spat at the police, smashed government buildings, threw axes, and chained themselves to railings in a sustained campaign of disobedience. They were arrested, imprisoned, heckled, humiliated and went on hunger strike. Emily Davison’s protest at the Epsom Derby lead to her death under the hoofs of the King’s horse. Others endured solitary confinement and force-feeding to break their hunger strikes.

“We are here, not because we are lawbreakers; we are here in our efforts to become lawmakers.”

The Daily Mail, as pathetic and odious then as it is now, coined the derogatory, diminutive term suffragette, derived from suffragist.

Emmeline’s three-word campaigning slogans ‘Votes for women’ and ‘Deeds not words’ still chime down the years: ‘Make poverty history’, ‘Feed the world’, ‘Save the whale’, ‘Yes we can’, even ‘Arbeit macht frei’.

After the Great War, The Representation of the People Act 1918 gave the vote to all men over 21 and some women over 30. Bah! Hardly the dream of universal suffrage that so many had fought for. The Women’s Party emerged and Emmeline embarked on lecture tours, and tirelessly continued campaigning.

By the 1920s, well into her 60s now, the long struggle, frequent imprisonment and hunger-striking, a punishing schedule and emotionally-draining strife with her daughters was taking its toll. She died in a nursing home in London aged 69.

Three weeks after her death The Representation of the People Act 1928 was passed. At last women achieved electoral equality with men: aged over 21, regardless of property ownership. Now the struggle for equality could truly begin. Still it continues.

What would Emmeline make of today’s world? I think that she’d be horrified that 41 years after the Equal Pay Act 1970, the gender pay gap is as wide as ever. I think she’d be shocked that despite the Sex Discrimination Act 1975, women still get second class treatment. I think she would be appalled by the lack of aspiration of so many girls today (which incidentally is not their fault. If we don’t tell girls what’s possible, no wonder they aspire to be WAGs or mums at 16.) She would be bemused – and yet she would understand. Today’s Sisters would do well to revisit and emulate the proud tradition of women’s protest that Emmeline began.

And so each election time, when my polling card falls through the door, I thank my lucky stars that Emmeline, and the thousands of other women who struggled with her, made it possible for me to mark my X in that box.

Women: remember that your right to vote was hard won. When I see that thousands of people today, especially young people, can’t be arsed to vote, I could weep. Even if you think all the candidates are self-serving numpties you can still vote: simply spoil your ballot paper. Spoilt papers are counted and together they send a clear message. They say: ‘there’s no one worthy of my vote’. Just do it for Emmeline.

And today, as the Arab world erupts and millions of people struggle to have their human rights respected and opinions heard, I hope that they too will find courageous warriors to lead them, as we had our Sister Emmeline.