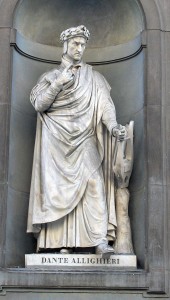 Today we celebrate one of the world’s most beloved poets, Dante Alighieri, who died on this day in 1321. Despite the passage of nearly seven centuries, and the seismic political and religious shifts that have occurred since the medieval struggles between Pope and Empire that informed The Divine Comedy, it is Dante’s description of humanity’s journey through Hell in pursuit of spiritual perfection in Paradise which  continues to so vitally evoke our essential fears of morality and mortality. That Dante moves us not only as an Imparter of universal truths, but also as a Receiver – through his enduring love for a certain Beatrice Portinari, who would act as the divine guide of his thoughts and emotions “toward that ideal perfection which is the goal of every noble mind” – cements his place in our hearts as the “Supreme Poet”.

I can say little more about a world figure as potent as Dante. I’d like instead to direct you to Thomas Carlyle’s Heroes and Hero-Worship – and, in particular, the chapter therein entitled “The Poet as Hero” – which offers not only a masterful overview of Dante’s greatness comparable, according to Carlyle, only to Shakespeare (“Italy produced the one-world voice; we English had the honour of producing the other”), but serves also as a useful reminder of the essential role poets play as Culture Prophets and the great beholders of Truth.

4 Responses to 14th September 1321 – the Death of Dante Alighieri