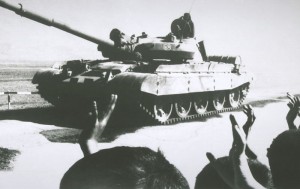 Empires fall. It’s what they do. It’s inevitable.

Sometimes the collapse is due to the depletion of essential resources. Sometimes it’s a result of being overwhelmed by external aggressors. Sometimes it’s plague or a natural disaster that does it. And if all else fails, invading Afghanistan will do the trick.

At the end of December 1979, at the request of the communist government in Kabul, the Soviet Union made an initial deployment of 50,000 troops to Afghanistan. During the following eight and a half years, more than 600,000 troops from the Red Army and the KGB would wage a disastrous, futile war in central Asia until Mikhail Gorbachev eventually acknowledged defeat in May 1988 and signalled the beginning of the withdrawal. By the time the final Soviet soldiers had left Afghanistan – on this day, February 15th in 1989 – more than 15,000 of them had been killed and 50,000 injured; including over 10,000 left permanently disabled.

But as is so often the case when a mechanised army occupies a country, these figures are dwarfed by the number of Afghan casualties. Estimates vary wildly, but the low end runs to a million dead while the high end suggests the total might be double that. In addition, three million were injured with over a million permanently disabled. By 1986 half of all refugees on the planet were Afghan nationals.

As terrible as these statistics are – and they are – the truly terrible thing about them is just how representative they are of modern warfare. They are not an anomaly. And with the low-end estimate of casualties in the current US-led wars in Afghanistan and Iraq approaching 2 million, it is clear that as a species, we have great difficulty learning the lessons of history.

I opened this piece by linking the occupation of Afghanistan during the 1980s with the fall of the Soviet Empire. Needless to say, it would be simplistic – inaccurate even – to suggest that the one directly caused the other. Empires fall, certainly, but it’s rarely a linear process with a single cause. The Soviet Union was suffering from a number of systemic failures and the Afghan war merely compounded them. Brought them to a head. It sapped the morale of the entire nation, as well as draining resources. It emboldened the nations of Eastern Europe and the southern Soviet republics who saw the limitations of the Red Army dramatically exposed by the Afghan resistance – the mujahideen. Where once the threat of Soviet military strength held together the Empire, by the mid-1980s that threat was a shadow of its former self and it didn’t take much insight to realise that Gorbachev’s Moscow wouldn’t have the stomach for another invasion should people start poking holes in the Iron Curtain.

The collapse of the Soviet Union had been inevitable for decades, but there’s little doubt that the timing was – at least in part – dictated by events in Afghanistan.

Yet the Soviet misadventures in Afghanistan did not end when the word “Former” became the standard prefix to “Soviet”. In fact, they led – more or less directly –to the current US-led misadventures in the region. And those of us who believe the neo-imperial power of the United States to be on the wane cannot help but see the parallels and the tragically bloody ironies.

It should be remembered that the Soviet Union originally got dragged into Afghanistan in order to “fight terrorism”. One hardly need ask whether that sounds familiar. The government in Kabul had come to power after a military coup which overthrew a corrupt and tyrannical regime. A regime responsible for the execution of tens of thousands of political opponents. One of the first acts of the new government was to attempt radical reforms of Afghan society to advance the cause of women’s rights by changing the laws around marriage and property ownership. This was met by powerful resistance from Islamic traditionalists who launched an insurgency to overthrow the communists. After months of instability caused by the escalating violence, Kabul called on the Soviet Union to provide military assistance.

Even as the Red Army poured men and machines into Afghanistan, the United States – under Ronald Reagan – saw an opportunity to inflict pain upon The Evil Empire by training and financing the mujahideen. It would be wrong to paint the Kabul government as a progressive force, but the reality is that the United States decided to throw their weight behind a movement that was the 1980s equivalent of the modern Taliban, in opposition to policies aimed at loosening the grip of fundamentalist Islam on the nation. CIA agents flocked to central Asia and brought huge quantities of weapons with them. The rocket-propelled grenades which would become the trademark of the Afghan resistance as they destroyed Soviet helicopters by the dozen, were a gift from the US government. As were the truckloads of automatic rifles, ammunition and bomb-making equipment. The “terrorist training camps” which became the target of the 2001 US attack were originally set up by the US. The Islamist cells that carried out the attacks on the USS Cole, the World Trade Center and the Pentagon were offshoots of the CIA-trained mujahideen.

And unlike the more kooky 9-11 conspiracy theories, this is historical fact and is as graphic a demonstration of the law of unintended consequences as we are ever likely to see. When the Soviet Union completed its withdrawal from Afghanistan on this day in 1989, they left behind a nation reduced to rubble and body parts. A nation in the thrall of a fundamentalist religious philosophy, radicalised by foreign occupation and trained in the craft of terrorism by the Central Intelligence Agency. What happened next should have surprised no one.

2 Responses to 15th February 1989 – The Soviet Withdrawal from Afghanistan