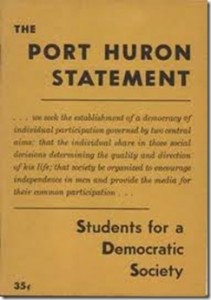 The defining document of the New Left

On this day in 1962, a small group of American students authored a mission statement that would serve as the defining document of the revolutionary 1960s.

“We are people of this generation, bred in at least modest comfort, housed in universities, looking uncomfortably to the world we inherit,” begins the so-called Port Huron Statement – the manifesto of the fledgling Students for a Democratic Society. This extraordinary 75-page tour de force went on to challenge every fundament of American rule: its politics, economics and imperialistic policies; the Cold War, anti-communism and the nuclear arms race; and, on the homefront, inherent racism and the civil rights movement. It asked the critical questions: Why was there poverty in a land of such plenty? What gave America the right to forcefully intervene in foreign countries? How could a nation rife with political and racial repression claim to be “democratic”?

With startling intellectual breadth, these young students painted an unsavoury portrait of America in thrall to the quest for material security, willing to tolerate – indeed, able to ignore – racial injustice and the rise of, in the words of Dwight D. Eisenhower, “a military-industrial complex” that controlled all aspects of American society. More than anything, it dared to challenge the basic assumptions about America and its place in the world. By calling for “participatory democracy” to self-determine a better and more responsible future, the Port Huron Statement gave voice to a new generation of radicals and marked the birth of the American student movement.

Ambitious and imaginative, idealistic and uncompromising, the authors of the Statement proposed a radical new vision:

… to replace power rooted in possession, privilege or circumstance by power and uniqueness rooted in love, reflectiveness, reason and creativity … If we appear to seek the unattainable, then let it be known that we do so to avoid the unimaginable.

Central to this vision was the involvement of youth. Port Huron condemned an educational system geared only to reinforcing the status quo rather than sparking genuine inquiry, and called on students to open their own eyes and become active participants in a reordering of American values.

And lo, American students did heed the call.

When the Statement was drafted at the first ever convention of the Students for a Democratic Society that June of 1962 in Port Huron, Michigan, its members numbered only a few hundred. Skip ahead another half-dozen years, and SDS had become a militant organisation of over 100,000, with chapters in over 350 American universities. Galvanised by the escalating war in Vietnam, campuses erupted across the country. Buildings were occupied, strikes were called, mass protests held as students made their feelings known, their voices heard.

The Port Huron Statement claimed to be articulating an “agenda for a Generation.” Its principle author and lifelong activist Tom Hayden would later reflect:

Some of that agenda has been fulfilled: The cold war is no more, voting rights for blacks and youth have been won, and much has changed for the better in the content of university curriculums. Yet our dreams have hardly been realized … there is a new movement astir in the world, against the inherent violence of globalization, corporate rule and fundamentalism, that reminds us strongly of the early 1960s. Is history repeating? If so, “participatory democracy” and the priorities of Port Huron continue to offer clues to building a committed movement toward a society responsive to the needs of the vast majority.

Black Panther leader Huey P. Newton said, “The revolution has always been in the hands of the young. The young always inherit the revolution.” Today’s student activists owe an enormous debt to the bold vision of the Port Huron Statement, and would be well advised to acquaint themselves with its utopian tenets.

So here it is, and all power to you.