18th October 1977 the Revolutionary Suicides of Baader and Ensslin 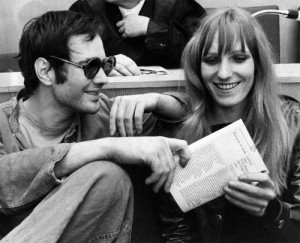 Today we consider the twin revolutionary suicides of Andreas Baader and Gudrun Ensslin – co-leaders of Germany’s nihilistic Baader-Meinhof Gang – whose bloody and murderous exploits throughout the 1970s – made as part of Europe and Asia’s larger unhomogenised terrorist group known as the Red Army Faction – embodied the inchoate youthful outrage of a new German generation doomed to be governed by their parents’ ‘Generation of Auschwitz’, as Gudrun Ensslin termed them. No attempt can be made here to explain or condone the actions of these outrageous desperados, for their behaviour was informed entirely by the dreadful realisation that, for Germany’s immediate postwar generation, the Allied victory over Hitler’s Nazis had in no way guaranteed the total removal from public office of ‘Hitler’s Footfolk’ (as the German writer Werner Pieper later termed it). Emerging from the same Berlin Kommune 1 that spawned such protest artists as Amon Düül and Amon Düül 2, Ensslin and Baader chose not to supply the soundtrack for the revolution but – with their leather jackets, long hair and Bonnie and Clyde “last chance” mentality – to instil a sense of rock and roll flair and youthful outrage into their urban guerrilla war against continued Fascism, continued Imperialism and the escalation of Capitalism as imposed on W. Germany by the British and American occupation.

Perhaps readers may consider it unrighteous to ‘celebrate’ such suicides, but such was the desperation of these postwar rebels that only through death could they wrestle ultimate control of their lives from The Man. Let us not therefore judge negatively the actions of Gudrun and Andreas, but instead meditate on the comment of the Irish Christian mystic, Edmund Burke: “All that is necessary for the triumph of evil is that good men do nothing.”

For Andreas and Gudrun, however, doing nothing was not an option. And so instead – and with grievous consequences for all involved – they chose to give form and reality to the declaration of their Japanese RAF counterparts Hadaka no Rallizes (Les Rallizes Denudes): “Sometimes you have a guitar; sometimes you arm yourself.”