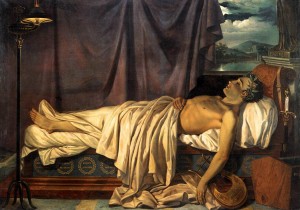 Lord Byron on his death-bed

Yes, he was “mad, bad and dangerous to know” – flamboyant, dynamic and notorious for his scandalous love affairs and aristocratic excesses. A proto-rock star, he was the most famous literary figure of his day – capturing the imagination of Europe like no one else in the whole of the nineteenth century. And of course he was one of the great major Romantics; a brilliant poet of brooding passion and, in the words of Goethe, “boundless genius”. But lest we forget that on this day in 1824, George Gordon Noel, 6th Baron Byron – more commonly known as Lord Byron – died a revolutionary in the Greek town of Messolonghi.

When Byron set out from Italy the previous summer, it was with the hope that his name, money and idealism could somehow assist the Greeks in their struggle for independence from Ottoman Turkey. His first six months as a freedom fighter were rainy and miserable, but the poet remained true to his altruistic mission. He took part of the rebel army under his own command, and planned to attack the Turkish-held fortress of Lepanto at the mouth of the Gulf of Corinth. On 9th April 1824, however, having been soaked by a heavy rain whilst out riding, Byron suffered fever and rheumatic pains and within days was fighting for his life. Repeated bleedings, which he initially resisted, further debilitated him. Among his last recorded words were, “I have given [Greece] my time, my means, my health – and now I give her my life! – what could I do more?” He was thirty-six years old.

The Greek nation was overwhelmed by grief. At memorial services throughout the country, Byron was proclaimed a national hero. His death served to unite Greece against the enemy and elicited support from all all over the world. In October 1827 British, French and Russian forces destroyed the Turkish and Egyptian fleets at Navarino, assuring Greek independence, which was acknowledged by the sultan in 1829.

How easy it would have been for Lord Byron to rest on the laurels of his nobility, celebrity, talent and wealth. Even when forced to flee from Britain in 1816 following the scandalous affair with his half-sister, his exile in Switzerland and northern Italy could have been one of extravagance, leisure, literary output, tumultuous affairs with anyone he so chose (most likely brilliant married women or handsome younger men), and great intellectual friendships with the likes of Percy Bysshe Shelley – as indeed it was for the first seven years.

But Byron was a genuine and untiring champion of the underdog, a committed libertine and – as he wrote in Don Juan, Canto VIII – a firm believer that “Revolution/Alone can save the earth from hell’s pollution”.

The very embodiment himself of the famed Byronic Hero, he defended that principle with his life.