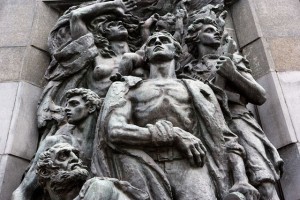 Of the many tales of sacrifice and struggle commemorated here at On This Deity, few can be more poignant or inspirational than today’s – the anniversary of the beginning of the Warsaw Ghetto Uprising.

On this day in 1943, Nazi security forces began the work of ‘liquidating’ the Jewish ghetto in Warsaw that – since January of the same year – had offered armed resistance to the forced deportations. The fighters of the ghetto were from the start isolated, ill-equipped and with no real hope of any sustainable success. But they served as a beacon of hope, and inspired others to fight back.

Warsaw’s Jewish community was one of the largest in Europe. And in spite of a long history of Polish and Russian anti-Semitism, it had developed a longstanding and thriving Jewish quarter dating back to the thirteenth century. With the invasion of Poland by Nazi Germany in September 1939, it was natural that Jews throughout Poland would seek refuge and support from the community in Warsaw. Within days of the Polish army’s collapse the Nazi authorities began to impose anti-Jewish laws and to segregate the city.

In November the Jewish quarter was effectively sealed off from the outside world with a 20-metre-high wall that stretched for 11 miles. The ghetto was officially established.

With the exception of a small number of skilled workers who left the ghetto during the day for work, contact with or from the outside was prohibited and enforced by death. Non-Jews were forced from the ghetto while 138,000 Jews from outside were forced in. Starvation and disease, particularly typhoid, took a grip of the over-crowded area; by the summer of 1941, 5,000 people were dying each month.

A by-product of this enforced over-crowding manifested in the creation of a community with its own self-organised hospitals, libraries, orchestras, theatres and schools. Underground newspapers and publications flourished as the ghetto was increasingly radicalised.

And in this pressure-cooker environment, the full spectrum of Jewish political organisations flourished. Two main blocs emerged. On the one hand, there was a sometime uneasy alliance of the Left between the Communist PRR, Left-Zionist organisations such as Hashomer Hatzair, and the largest and longest established group – the Anti-Zionist Socialist Bund. Together they would form the armed resistance group known as the ZOB (Jewish Battle Organization), while another smaller group of Rightist Zionists came together in the ZZW (Jewish Military Union).

Outside of the resistance groups stood conservative ‘community leaders’– some of whom formed the Jewish Council ordered by the Nazis to administer and self-police the ghetto. Amongst their ranks there were undoubtedly those who were opportunistic collaborators. But there were also others who believed they could save lives by compromising with the Nazis. The tragedy of this position is personified by Council leader Adam Czerniaków, who committed suicide in July 1942 on realizing the full reality of the unfolding Nazi Holocaust.

The summer of 1942 saw the Final Solution enter a new phase. The Nazis ordered the Jewish Council to provide 6,000 people a day for ‘deportation’. This was initially carried out by Jewish police units – supposedly on the basis that deportees were destined for labour camps. In fact the deportations were to the newly built extermination camp of Treblinka, only forty miles away. News of the camp led to a fateful decision to resist any further deportations. And so, in autumn the first small Jewish combat units were formed.

These groups were horrifically ill-equipped and dependent upon stolen German small arms and a tiny quantity of weapons smuggled in from the resistance outside the ghetto – the Polish Home Army. But the overriding attitude of the Home Army and the exiled Polish Government towards the Jewish groups was ambiguous at best. Hostile to the Left and deeply tainted with traditional Polish anti-Semitism, the Polish government in London did not provide support. As the fighting unfolded, however, the Home Army and the smaller but more supportive Communist resistance forces (the People’s Guard) did provide some support, and at one point entered the ghetto to fight alongside the Jewish resistance.

In January of 1943, Nazi forces surrounded the ghetto and began a mass round-up for deportation. Most of the community refused the order and Jewish fighters took to the streets. As the fighting raged from the cellars and narrow streets, the deportations were prevented. For twelve weeks the fighters of the ZOB and ZZW had control of the ghetto and the German forces were held at bay. These Jewish fighter had no long-term plan or even a hope of survival; they knew only that they were saving their community from certain death in the camps. The Home Army – increasingly galvanized by the bold resistance – smuggled further weapons into the ghetto.

Even so, most fighters were armed only with a pistol and petrol-bombs, and could offer no real match to the tanks and artillery of the Germans. And so, on the morning of 19th April 1943, the SS amassed their weapons at the perimeter wall and at 6am entered the ghetto with the intention of ‘liquidation’.

Against all the odds, the ighting continued. But by mid-May the Nazis had achieved their objective. 13,000 Jews had been killed and most of the remaining 50,000 were deported to the death camps. Only a tiny handful of the fighters escaped, who went on to link up with other groups – particularly the People’s Guard.

Some of these fighters survived to participate in the uprising of the wider city of Warsaw in August 1944. This – another story of extraordinary courage, sacrifice and betrayal by the outside world – resulted in the destruction of 85% of the city and the death of 220,000 Poles. Advancing Soviet forces were only 15 kilometers away when the Home Army took control of the city, but Stalin cynically and deliberately left the resistance to its fate. Debate still continues as to whether the Red Army was in a position to support the uprising, but there ca be little doubt that an independent Poland – which may well have emerged from a successful uprising – would have been a great inconvenience not just to Stalin but to the future carve-up of Eastern Europe that had been agreed amongst the Allies.

The enduring historical significance of the Ghetto uprising remains in Israel where groups on both the Left and Right can trace their antecedents to the Jewish fighters. But most of all, the uprising provided inspiration both to the wider Polish Resistance and to the Jewish People who – contrary to the historical misrepresentation as passive victims of the Holocaust – provided the nucleus of resistance groups throughout war-torn Europe and led prisoner uprisings within the Nazi camps.

In the words of one of the last surviving Ghetto fighters, Marek Edelman: “No one believed they would be saved. We knew the struggle was doomed, but it showed the world there was resistance against the Nazis, that you could fight the Nazis.”