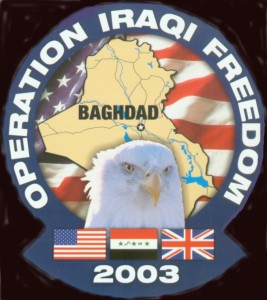 On March 19th 2003 US President George W. Bush announced that US and UK armed forces had launched strikes against “targets of military opportunity” in Iraq. It marked the beginning of Operation Iraqi Freedom; a disastrous conflict that would drag on for the rest of the decade resulting in massive casualties, a huge economic cost and the further destabilisation of a region already beset by conflict and strife.

Of the many strange things about Operation Iraqi Freedom, perhaps the strangest is the fact that even now – eight years after the invasion began – no convincing, coherent rationale for the conflict has emerged. Certainly reams of newsprint have been filled with the words of apologists for the war… from well-meaning liberal interventionists who insist that Western governments have an obligation to remove tyrants from power when the opportunity arises, to hard-nosed neoconservatives who openly speak of the strategic value of the Iraqi oilfields and the necessity of installing a pro-Western government in the area. There are even a few WMD-obsessed commentators who insist that Iraq posed a potential threat to the world and that threat needed to be neutralised.

Ultimately, however, none of these attempted justifications stands up to scrutiny. Those who wish to believe the story that the US and UK governments truly saw Iraq as a threat are, of course, welcome to do so. Perhaps they’d like to email me their bank account details as I have 30 million dollars I need to transfer out of the Bank of Lagos…? Iraq spent the entire 1980s engaged in a war of attrition with Iran and then had the remainder of its armed forces comprehensively annihilated during the first Gulf War. Afterwards the nation was systematically decimated by international sanctions which – as is so often the case – caused massive suffering among the populace while doing little to harm the tyrant at which they were supposedly aimed. So the fact is, by 2003 Iraq posed no threat to its immediate neighbours, let alone the nations who claimed they were acting out of self-defence by invading. And those who suggest that the US and UK governments were unaware of this fact are either deluded or lying.

The notion that Iraq was invaded to liberate its populace from a terrible tyrant is similarly flawed. It simply does not tally with the facts as we know them. Firstly, and most obviously, the world is filled with tyrannical regimes guilty of terrible crimes against their own people. And there’s just no evidence that the US and/or UK have a general policy of intervening in such situations. Secondly, the manner in which the invasion was conducted completely contradicts the notion that it was carried out on behalf of the Iraqi people. This fact can be illustrated with two words… “cluster bombs”. If you are launching a military offensive in which the liberation of the local population is the primary goal, then the very first question at the very first planning meeting must be, “how do we conduct this operation without the use of cluster bombs?” If that is not the first item on your agenda, then any claims that you have the interests of civilians at heart are sheer nonsense. According to Human Rights Watch, over 2 million cluster munitions were dropped on Iraqi population centres in 2003 alone (by both US and UK forces). The resulting casualties number in the many thousands. These weapons, particularly when dropped on urban centres, are guaranteed to kill and maim children. Everybody knows this. If you use them, then the interests of the civilian population are not your first priority.

What’s perhaps most curious is that even the blunt neoconservative claims that Operation Iraqi Freedom was conducted to further US economic and strategic interests isn’t entirely convincing. At the very least, if that was the original reason, it has backfired. Prior to the invasion, Iraqi oil was finding its way to market via the UN’s “oil for food programme”. The year prior to the invasion, this programme saw Iraq selling 2.5 million barrels per day on the global market which – according to the US Energy Information Administration – is just short of the 2.8 million barrels per day that Iraq is capable of producing for export. As to be expected, production dropped significantly after the invasion and is only now beginning to approach the levels it achieved under the oil for food programme. Furthermore, the invasion has not produced the kind of stable pro-Western nation which would justify Operation Iraqi Freedom from a strategic perspective. Instead Iraq now has a government divided along sectarian lines under constant siege from an insurgency that threatens to split the nation into several zones – the largest of which could perhaps fall under Iranian influence.

On top of this, the invasion of Iraq pretty much squandered whatever global goodwill the United States had received as a result of the September 2001 terrorist attacks. The retaliation against Afghanistan arguably lacked proportion and was badly planned and executed, but in the world of Realpolitik, it was both expected and accepted as the response of a superpower to the actions of Al Qaeda. Operation Iraqi Freedom, on the other hand, caused confusion and outrage. It made such little sense that it could only be viewed as an unjustifiable and blundering projection of imperial power against a former enemy. Indeed those who claimed that Operation Iraqi Freedom was little more than a son’s attempt to clear up the unfinished business of his father were as close to the truth as any of the “official” explanations.

Because perhaps controversially, it seems to me that the war genuinely did not have a rational explanation. It was instead the expression of the collective psychosis of western civilisation; an incoherent and largely unconscious lashing out at the most convenient enemy when it became apparent that Afghanistan simply could not provide the kind of catharsis-through-destruction that the United States required as a response to the September 11th attacks. Which brings us back to George W. Bush’s initial statement upon the commencement of bombing. His military had discovered “targets of opportunity” and was busy causing shock and awe by levelling them. When Afghanistan turned out not to have the kind of infrastructure against which the technological military of the west could conduct an effective campaign, they needed to find somewhere that did. And Saddam Hussein’s Iraq was just that… a convenient target of opportunity.

The result of this expression of mindless fury is a decimated nation, well over a million Iraqi casualties, the death of almost 5,000 US / UK troops, the sinister rise of western “private military contractors”, the conversion of three trillion dollars of public money into death and destruction, the accelerated destabilisation of an already precarious region, the final sinking of any collective morality possessed by ‘The West’ under the weight of Abu Ghraib, Guantanamo Bay and the indescriminate murder of civilians. Perhaps worst of all, by responding to the Al Qaeda attacks in such a manner, the US and UK may have set the tone for the coming century. As western capitalism begins to collapse and comes under both internal and external threat, have we used the desert surrounding Baghdad to set an ugly precedent?