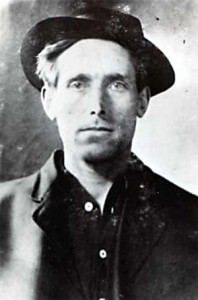 Today we pay tribute to the legendary labour organiser, protest songwriter and folk hero, Joe Hill, executed on this day 1915 in Utah following a notorious and highly controversial murder trial. A prominent and much-loved member of radical trade unionists the Industrial Workers of the World, Hill’s trial encapsulated America’s violent resistance to unionisation and disdain for its poor; his conviction – despite lack of evidence and no established motive – was widely seen as a conspiracy against the IWW and the working class. “I have absolutely no desire to be one of them what-ye-call-em martyrs,” Hill wrote from his prison cell as the date of his execution neared; but on the morning following his death, the New York Times predicted that “there will grow up in the revolutionary group a sincere belief that he died a hero as well as a martyr.” In executing a man for his ideology, the State of Utah did indeed create a martyr; in life, Joe Hill had not been particularly heroic – but in death he became an American Folk Hero and worldwide symbol of the exploited. Immortalised by protest singers such as Woody Guthrie, Pete Seeger, Paul Robeson, Phil Ochs and Joan Baez, Hill endures as a working-class icon ­– his very name remains a rallying cry in labour protests  a full century after his death.

Swedish-born Joe Hill emigrated to America in 1902 and found his songwriting voice in the struggles of his adopted country’s labourers. His hard-bitten anthems about the working class and its oppressors featured heavily in the IWW’s Little Red Song Book – issued free to members – and played a significant role in the movement’s ability to organise itinerant workers more apt to learn songs than read pamphlets. Renowned though he was amongst his fellow Wobblies, Hill would almost certainly by now be forgotten but for a bungled robbery on the evening of 10th January 1914 when two masked men shot and killed a former policeman and his eldest son as they closed up their Salt Lake City grocery store. Ninety minutes later, and six miles away, Joe Hill appeared at the home of a doctor suffering from a bullet wound in his chest, resulting from – he maintained to the end – an argument over a woman.  The doctor reported him to the police and, three days later, Hill was arrested for the grocery store murders.

Twelve other suspects were also arrested for the same crime, but when the authorities uncovered Hill’s association with the IWW, he became the victim of trumped-up charges and a press vendetta. The evidence against Hill was dubious. Only his bullet wound circumstantially linked him with shootings (four other men in the area were also treated for gunshot wounds that same night). But Hill was unwilling to implicate the married woman for whom he’d taken the bullet, and his failure to provide an alibi sealed his fate. The jury deliberated for only a few hours before finding the defendant guilty, and sentenced him to death.

The appeal process lasted sixteen months and received international attention. Amidst accusations of gross injustice, pleas for clemency arrived from all over the world, including the Swedish government. Even President Woodrow Wilson voiced his concerns. But the state of Utah, dominated by Mormons and wealthy “copper barons”, did not appreciate federal interference.  After his final appeal failed, Hill was scheduled for execution on 19th November 1915.  The night before, and perhaps sensing his future legacy as a labour legend, Hill wrote a message to IWW leader Bill Haywood: “Goodbye Bill: I die like a true rebel. Don’t waste any time mourning – organise!”

And indeed it was as a true rebel he died. Facing the five-man execution squad, upon the command of “Ready … Aim …,” Hill himself shouted, “FIRE!” His cremated ashes were sent to every IWW state chapter – except Utah – along with a photo, captioned “Joe Hill: murdered by the capitalist class, Nov. 19 1915.” The envelopes were opened in unison on 1st May 1916 – International Labour Day – and Hill’s ashes were scattered to the wind.