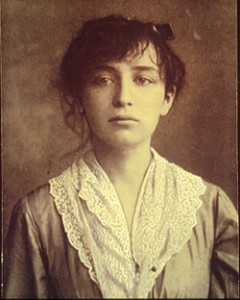 Today we pay tribute to the brilliant Camille Claudel – widely considered to be the most gifted female sculptor the world has ever known. Her extraordinary achievements have nevertheless been eclipsed by her notorious relationship with Auguste Rodin. While her legacy has finally begun to emerge from the confines of ‘intriguing footnote to a great man’s life’, there is no escaping the truth that  it was as Rodin’s student, model, muse and lover that Camille’s destiny was forged. The sad fact is that her brilliance may never have even been noticed without Rodin’s patronage. But such limited opportunities for female artists in the so-called “modern era” of fin de siècle Paris resulted in the resentment and fury of the prodigiously and singularly talented Claudel – who, fully aware that she was at least as gifted as the celebrated Rodin, was literally driven insane by the philistinic discrimination of a male-dominated art world that had not yet accepted the fact that women were capable of genius. The story of her post-Rodin years reads like a Dostoevsky novel, as Camille’s madness manifested against the man who’d been her lover for fifteen years. And, in what must surely be one of the greatest of all art tragedies, she languished for the last thirty years of her life in an insane asylum – her famous brother, the poet and playwright Paul Claudel, having committed her immediately after the death of their supportive father. Despite doctors’ recommendations that she was cured and could return home, her family never allowed her release – leaving Camille to lament in a letter to her brother in 1935: “I live in a world that is so curious, so strange … Of the dream which was my life, this is the nightmare.”

It was in 1883 that nineteen-year-old Camille Claudel met and became a student of Auguste Rodin, twenty-four years her senior. Rodin at once recognised her beauty and talent, and became obsessed with her. Within a year, they’d embarked on a passionate affair that inspired in him a personal renaissance culminating in his masterpiece, Gates of Hell – which Camille contributed largely to. For fifteen years, theirs was a beautiful and fruitful union of art, mind, body and soul; the two artists’ work throughout this period was so mutually influenced and interchangeable that, whilst being a rare example of artistic symbiosis, would also eventually lead to Camille’s paranoia that Rodin took credit for her own work. Rodin promised to marry her, but was reluctant to leave his (other) long-term mistress, Rose Beuret – a seamstress on whom he depended to run his household, and the mother of his son. Camille repeatedly, desperately, asked Rodin to choose between them, but he refused. Finally, she could take no more of his indecision and the two separated in 1898.

Following their break-up, and although traumatised and wracked with depression, Camille took on her own studio and produced what is believed to have been her best works, including L’Age Mur  – an autobiographical sculpture depicting a love triangle. She also created hundreds of smaller-scale figures but none survive; as her anguish and depression deepened, Camille began the distressing pattern of working obsessively for months, only to destroy her creations. Her genius had for so long been connected to and fuelled by Rodin that the loss plunged her into insanity. Dispossessed from the prestige of Rodin’s inner circle, Camille became convinced that her former lover was plotting against her – her paranoia becoming so great that she alienated even the few who remained loyal to her. She continued to create compulsively as if she could exorcise her trauma; her last known works were disembodied feet and hands.

Camille lived in her filthy studio with her cats, broken sculptures and her shutters sealed from the light until 5th March 1913. Just three days after the death of her beloved father, her now-famous brother Paul, at the urging of their mother, arranged for his sister’s internment. Five days later two orderlies broke into her apartment and took her away by force to Montdevergues Asylum – where she died alone, thirty interminable years later.

She is buried in a communal grave, no one from her family having bothered to claim her body.