1st April 1939 The End of the Spanish Civil War 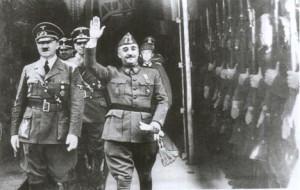 On this day in 1939, Generalissimo Francisco Franco broadcast his final radio communiqué of the Spanish Civil War: “Today, after having disarmed and captured the Red Army, the Nationalist troops have secured their final military objective. The war is ended. Burgos, April 1, 1939. Year of Victory.” Thus concluded one of the most brutal and bloody civil wars in history.

For three violent years this convoluted fratricidal struggle had raged, pitting Left against Right, anti-clericals against the Church, workers against the landed classes, Republicans against Monarchists, Communists against Anarchists. Spain’s empirical glory years were by then a distant memory, but its colonial barbarism was seamlessly resurrected for this war against its own: villages were raped, looted and pillaged; theatrical executions were staged with bodies torn apart limb from limb; the cities of Barcelona and Madrid became urban battlefields – their once cosmopolitan streets reduced to dust and littered with the lifeless victims of civilian vigilantes. In all, some half-a-million perished.

But while the declaration of victory may have marked the official end of the savage conflict, for many the suffering was far from over. In his first dictatorial decree, Franco made clear the fate of all those who had opposed the Nationalists. And so began a near-forty-year reign of vindictive terror, as this unrestrained and merciless tyrant exacted systematic revenge against all democrats, liberals, socialists and – above all others – his most-despised enemies, the communists and anarchists. Between 1939 and 1975, an untold number of alleged political opponents were executed – some estimates reaching into the millions.

While the anniversary of the end of the Spanish Civil War is an occasion to lament the tragic loss of life and ensuing four-decade absolute rule of one of the twentieth century’s most despicable despots, it is also an opportunity to remember that the sub-plots of this conflict extended way beyond Spain’s polarisation. Franco’s victory was won only with the military support of Nazi Germany and Fascist Italy, and the dithering appeasement of Britain and France. Although all the European powers had signed a Non-Intervention Agreement just one month after the war broke out, Germany and Italy both promptly ignored it. Mussolini was happy simply to flex his ideological muscle and consolidate fascism in the Mediterranean. But for Hitler, the Spanish Civil War was an ideal testing ground for tanks and aircraft that were just being developed as part of the German re-armament. The Nazis provided the planes that airlifted Franco’s army from Morocco to Spain, and then successfully converted those same planes into terror bombers. Britain, meanwhile – weary of both the fascist Nationalists and Soviet-backed Republicans – sat passively on the fence. So surprising to the Nazis was their unopposed “dry run” that, during an emergency meeting in Rome on January 14th 1937, Hermann Göring told Mussolini that they must both escalate their aid to Franco at once, as Britain would surely intervene within three weeks. But that intervention never came.

How different might the rest of the twentieth century have been had Göring’s hunch been correct? Neville Chamberlain claimed he wished only to avoid European war but in truth Britain allowed its economic and class interests to outweigh its strategic interests. And so a Red but democratic Spain was sacrificed in favour of fascist aggression. This policy of appeasement, however, only advanced the inevitability of deeper conflict. During their mutual Spanish adventure, Germany and Italy sealed the Axis Pact, experimented with technology, tested and perfected their military techniques, and were emboldened by the impunity with which they acted despite the existence of the Non-Intervention Agreement.

And as a ravaged Spain was forsaken and condemned to Franco’s brutal vengeance, just five months later, the rest of Europe would be plunged into the horrors of World War II.