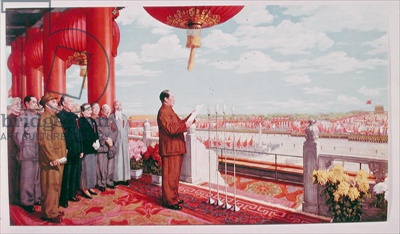 “Communism is not love. Communism is a hammer which we use to crush the enemy.” – Chairman Mao

On this day in 1949, following twenty years of bitter and bloody civil war, Mao Zedong stood victorious at Beijing’s Gate of Heavenly Peace and solemnly proclaimed the founding of the People’s Republic of China.  At last, 500 million poor and downtrodden were liberated from China’s age-old tyranny of imperialism, warlords and landlords.

But the utopian promises Mao made to the masses were not to be. Instead, for three decades, the people of this new so-called republic were nothing more than dispensable victims of a World Tyrant whose megalomaniacal policies such as the Great Leap Forward and Cultural Revolution led to the deaths of an estimated 70 million. This was a democide so horrific and unfathomable that it dwarfs Stalin’s 40 million. This was a death toll so abstract – and of a people so alien to most Westerners – that today there remains a shocking lack of awareness that Mao’s hands were far bloodier than Hitler’s.

Moreover, so shrouded in secrecy was the first era of the People’s Republic that hip New Leftists, including such influential public figures as John Lennon and Jean-Paul Sartre, loudly espoused Mao’s Little Red Bookisms without any awareness that they were in fact condoning a mass murderer who cared nothing for his own people.

Worse still are today’s Western apologists, who point to China’s economic development as some sort of intellectual defense of the indefensible – whilst capitalist interests alone, including the cynical decision to stage the 2008 Olympics in Beijing, preclude any denouncement of what remains a highly dubious regime with one of the most appalling human rights records in the world.

And, perhaps worst of all, Mao’s People’s Republic of China – along with Stalin’s Soviet Union – so comprehensively desecrated the very name of socialism that capitalism has been allowed to reign unchecked for long enough to bring the whole wide world to the brink of economic and environmental disaster.