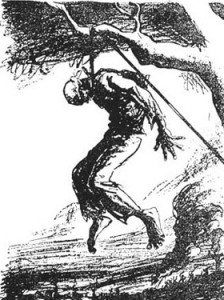 “Southern trees bear a strange fruit, Blood on the leaves and blood at the root.”

Between 1882 and 1968, 4,743 lynchings occurred in the United States. And that astonishing figure only accounts for those that were recorded. Behind every one of those 4,743 extrajudicial “mob rules” executions, there lies a tragedy – but today we are remembering a particularly sick episode. On 20th April 1911, in the small town of Livermore, Kentucky, a black man named Will Porter allegedly shot and injured a white man during a barroom brawl. Fearful that the jailhouse would be wrecked by local vigilantes, the local sheriff opted to hide Porter in the basement of the Livermore Opera House. The angry mob discovered the ruse, stormed the building and – after finding the terrified Porter hiding in the basement – bound him hand and foot and dragged him upstairs. Taking in the theatre’s stage decorated with woodland scenery, one of the mob leaders was perversely inspired to turn Porter’s fate into a public performance. The vigilantes took over the box office to sell tickets to the spectacle: those in the balcony would be limited to one shot only, while those willing to pay extra for orchestra seats could empty their guns. Fifty men paid the admission and took their seats to find Porter centre-stage, tied to a pole. The organisers were unsure how to turn on the stage lights, so the lynching occurred in an eerie semi-darkness. “Of about 200 shots fired,” reported the New York Times, “nearly half entered the body of the black man and the remainder tore to shreds the woodland scenery arranged for the presentation of a much milder drama.”

The sickening story of Will Porter might have been forgotten along with most of the other 4,743+ lynching victims if not for the National Association for the Advancement of Colored People. Founded in 1909, the NAACP vowed to wage war on this gruesome practice. Following the American Civil War, the lynching of African-Americans in the Southern and border states became an institutionalized method to terrorise blacks and maintain white supremacy. Hangings, shootings, burnings at the stake, maiming, dismemberment, castration – lynching was a peculiarly American combination of racism and sadism. Widely held to be acceptable, newspaper articles regularly told of “determined men” seeking to give “black brutes” a hearing in “Judge Lynch’s Court”. The Federal Government, having abandoned its post-war pledges, betrayed African-Americans through its persistent failure to enact a Federal anti-lynching law. On June 13, 2005, the United States Senate finally formally apologised. Louisiana Senator Mary Landrieu noted, “There may be no other injustice in American history for which the Senate so uniquely bears responsibility.”

As for the tragic case of poor Will Porter, two weeks after his death, the NAACP adopted a resolution condemning the lynching and sent letters to President William Taft, Congress and Kentucky Governor AE Wilson – who demanded the arrest of the lynchers. Warrants were issued for the arrest of the three ringleaders, who were separately indicted and tried on the charge of murder. All were acquitted.