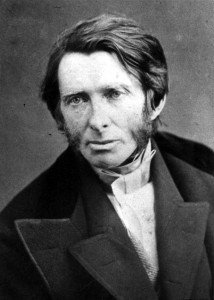 Today we pay tribute to culture hero, writer and visionary thinker, John Ruskin, who died 118 years ago aged 80. The most brilliant and influential art critic of his age, and arguably any other, Ruskin dared to challenge – and successfully re-defined – Victorian aesthetic sensibilities. In 1843 aged only twenty-four, he became famous with the publication of the first of his five-volume Modern Painters – a monumental, culture-changing study which would successfully establish the career of J.M.W. Turner and launch the Pre-Raphaelite painters.

Ruskin gradually turned his attention from the impact of art on society to the transformation of society itself. Young radicals buoyed up by the Communist Manifesto and European revolutions of 1848 seized upon his words. But it was not until 1858 when Ruskin lost faith in God and underwent what he called an “unconversion” that he would devote himself substantially to socioeconomic reform. His series of provocative essays, Unto This Last – containing the famous anti-capitalist battle cry: “There is no Wealth but Life” – anticipated the Green Movement by predicting the effects of industrialism upon the natural world. This was followed by his grand egalitarian project – Fors Clavigera: Letters to the Workmen and Labourers of Great Britain. Sustained for a period of over ten years, Ruskin’s monthly letters were the primary written platform for his social-reform crusade. By deed, he created his own utopia in the Guild of St. George – a medieval-style agrarian society designed to offer a radical alternative to capitalism’s inequity, where art and life would merge as one. Expounding on his utopian vision in Letter 58 of Fors Clavigera, the passionately anti-industrial Ruskin wrote:

“We will try to take some small piece of English ground, beautiful, peaceful and fruitful. We will have no steam-engines upon it, and no railroads; we will have no untended or unthought-of creatures on it; none wretched, but the sick; none idle, but the dead.”

John Ruskin’s high-reaching life was not without peculiarities and controversies. His marriage to Effie Gray in 1848 was annulled after six years on the grounds of non-consummation. In the late 1850s, he became obsessed with an underage girl for whom he nurtured an unrealised passion until her early death in 1875. Ruskin’s mental health deteriorated around this time. A few years later, he suffered a complete loss of sanity from which he never fully recovered following a libel trial initiated by James Abbott McNeill Whistler after Ruskin accused the painter of being the epitome of vulgar capitalist opportunism.

But genius often comes at a price. And, as the foremost architect of Victorian sensibilities – who can lay claim to awakening a generation to the meaning of art and convincing a rigid and staid society of its need for radical change – John Ruskin’s contributions to cultural and social reform are immeasurable. His ideas served as important blueprints for England’s bourgeoning Labour Party, and his intellectual and political heirs include William Morris, Marcel Proust, George Bernard Shaw, Mohandas Gandhi and Leo Tolstoy – who farsightedly said of Ruskin:

“One of those rare men who think with their hearts, and so he thought and said not only what he himself had seen and felt, but what everyone will think and say in future.”