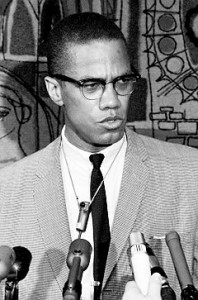 Today we pay tribute to America’s extraordinary 1960s ‘Black Muslim’ leader and future World Prophet Malcolm X – assassinated 53 years ago  – whose audacious and inflammatory words, infamous autobiography and extraordinary TV appearances as the Nation of Islam’s spokesman inspired millions of young Afro-Americans to abandon their long cherished ideas of racial integration with white society in favour of embarking on a new and controversial path of militant separatism. A fierce opponent of Rev. Martin Luther King’s Christian non-violence and pacifism, Malcolm X was instead so committed to liberating the black man in American society that he even envisioned a separate and temporary Afro-American homeland within America, and an eventual return to Africa itself, declaring: “For the black man in America, the only solution is complete separation from the white man!”

Raised as Malcolm Little in the far northern state of Nebraska, X endured a catastrophic childhood that left him entirely without faith in white society, his mother in a mental asylum, his father violently murdered by white landowners, and his six siblings scattered across the country. Still believing that hard work at school could radically alter his destiny, this untutored but brilliant young man was cruelly humiliated when his teacher – unimpressed by his wish to become a lawyer – commented that it was: ‘no realistic goal for a nigger’. Malcolm X concluded thereafter that it was not the openly racist white Southerner that was holding back black civil rights, but the prevaricating of so-called liberal Northerners, commenting in his Autobiography of Malcolm X:

“I know nothing about the South. I am a creation of the Northern white man and of his hypocritical attitude towards the Negro. The white Southerner you can say one thing – he is honest. He bears his teeth to the black man; he tells the black man, to his face, that Southern whites never will accept phony ‘integration’.”

Indeed, ‘phony’ integration was Malcolm X’s pet aversion: “The truth is that ‘integration’ is an image, it’s a foxy Northern liberal’s smoke-screen that confuses the true wants of the American black man.”  He continues: “400 years of black blood and sweat invested here in America, and the white man still has the black man begging for what every [white] immigrant fresh off the ship can take for granted the minute he walks down the gangplank.”

Without job prospects and fostered by white families, the still teenage Malcolm Little now adopted the nickname Detroit Red, embarking upon a highly successful career into his 20s as a ‘hoodlum, thief and dope peddler’ as the banner headlines splashed across the front of his future best-selling autobiography would one day proclaim. But when, in 1946, his violent lifestyle resulted in an ‘8-10 year’ jail sentence, the erstwhile Detroit Red used his copious free time to get some of that education he’d lacked for so long. He began by reading the dictionary from cover to cover, straining his eyes in the near darkness. A timely visit by his estranged brother Reginald introduced him to Elijah Muhammad’s Nation of Islam, a radical sect of interpretive Islam whose Afro-American members had all adopted the surname ‘X’ as a revolutionary alternative to that which had been forced upon their great grandparents by their white slavemasters. Jettisoning the hated surname ‘Little’, the newly revolutionary Malcolm X began a long correspondence with the Nation of Islam’s leader Elijah Muhammad, and joined the religion full time on concluding his jail sentence in 1952. And for the next twelve years, Malcolm X became the public face of the Nation of Islam, speaking always only those words prepared for him by his leader Elijah Muhammad. But so charismatic was Malcolm X that his radical public persona dramatically increased membership of the Nation of Islam, and inevitably caused jealousy among other high-ranking members. And when Malcolm X left the Nation of Islam in 1964 on account of hearing reports that his religious mentor Elijah Muhammad was a serial adulterer, X was also informed whilst on his subsequent pilgrimage to Mecca that the central racist core of the Nation of Islam’s teachings had absolutely nothing to do with the revelations of the Prophet Mohammed. And so it was as a Sunni Muslim that Malcolm X returned to the USA.

Malcolm X was therefore most likely murdered because he was perceived as having shamed the Nation of Islam by eschewing its singular creed for that of Orthodox Islam. But Malcolm X was a visionary and a truth seeker whose mission – even in death – could not be thwarted. Malcolm X’s rallying cry of Self-Reliance would be taken up soon after his death by Bobby Seale and Huey Newton’s Black Panther Party, thereafter by New York’s The Last Poets, hell, by each and every radicalised Afro-American youth determined to free themselves from the white values of their slavemasters. For, as Malcolm X described the Afro-American dilemma:

One Response to 21st February 1965 – Assassination of Malcolm X