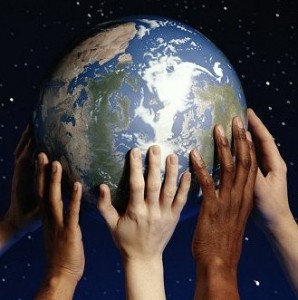 Love your Mother Earth today and every day

Earth Day was first observed 49 years ago. Across America thousands of local events were organised, and the decentralised method was as inspiring as the new awakening to environmental issues. Initiator Gaylord Nelson said, ‘all we need to do to bring an overwhelming insistence of the new generation that we stem the tide of environmental disaster is to present the facts clearly and dramatically’.

I don’t doubt his motives, or the good done by Earth Day then and since. But that approach has, at root, the idea that those in charge of the destruction of the environment haven’t realized what they’re doing. If we only tell them then their common humanity will make them do the right thing. What we face is more like a war than a crisis. Those who profit from destruction know what they are doing. For most of us, issues of family, friends and wellbeing are primary and making excess money is secondary. But to the corporate citizen and their enablers in government, these priorities are reversed.

As anyone who’s ever found themselves at the fridge at midnight knows, we all act in contradictory ways and against our long term interests. Consumer-capitalism depends upon ever increasing consumption of mostly finite resources, so it has to encourage us to act more and more against the interests of not only ourselves but also those with whom we share the biosphere.

Marketing and advertising have gathered the greatest analysis on the human psyche, they understand our deepest desires, fear and motivations. Then they saturate our waking hours with messages designed to push our buttons in order to make us buy stuff we would otherwise have ignored. Most of us think we are immune to advertising; in reality, all of us are susceptible.

Roy Wood’s wish that it could be Christmas every day is, when you think about it for more than a few seconds, a repulsive sentiment. To feel overfed, surrounded by wrapping and packaging only bought to be thrown away, and the contents that are shiny and new and not really what you’d have chosen yourself. You’ve got a bloated discomfort accompanied by the emotional deflation that comes from not actually feeling happier for your gluttony. And worse, you are now in heavy debt for all this. This is the position rich-world humanity finds itself in under consumerism.

It doesn’t take an especially brilliant mind to realise why you can’t consume infinitely more of something that is going to run out. Yet our economic structure – and thereby our social wellbeing – is based squarely upon this literally insane idea. At a modest rate of growth, 3% a year, we double the economy every 23 years. And again the next 23. This means growth of around 2000% every century.

Something like Earth Day was needed, in the same way Black History Month is needed; because every day is Overconsumption Day and every month is White History Month. Just as we need to move to a point where we don’t need to actively tip the scales back in our understanding of geo-ethnic history, we urgently need to make sustainability the central aim of our society. This cannot be done with greener capitalism, or with economic growth as we’ve come to know and worship it. We can only avoid the social meltdown of peak oil, and mass extinction from deforestation and catastrophic climate change, by adopting a steady-state economy without growth.

This is not about being nice to species we’ll never meet; it’s about saving our own asses, it’s about putting down the sledgehammer that we’ve been twatting our only life support system with. Earth Day must ask what the earth requires of us in order to sustain us, and then every day must be earth day.

Rather than asking what’s acceptable, we need to start by asking what’s necessary. For example, how much carbon can be sustainably emitted? That must be the cap, shared equally between everybody. That means a 95% cut for the UK. Painful, difficult, but if anything less is the road to oblivion then sorry, we’ve just got to do it.

Mining of things that cannot be infinitely recycled is unsustainable and can only be justified as a short-term stop gap. As the imperative intensifies, the measures required become more radical. The earlier we adopt what already sounds far-fetched, the less drastic and painful it will be.

This means being honest with ourselves as well as demanding action elsewhere. We all want something to be done, as long as it doesn’t make our own individual lives more uncomfortable. It’s other people over there who need to change, the selfish bastards.

For as long as it’s cheaper to merely appear to be responsible than actually do something, governments and corporations will devote their efforts to greenwash. And for as long as we secretly (or not so secretly) want indulging like some toddler or Jeremy Clarkson then they know they must talk about restraint even as they continue to stuff us like fois gras geese. The politicians understand that we want to feel good, even responsible, but they know that if there were anything actually forcing us to live within our means we’d be out on the streets in protest and they’d be out on their ears in disgrace.

We have to accept that this has been a wild party, using far more than we could afford, but if we stop now before we’ve pawned all the family silver for a few more beers and snorts that we won’t remember anyway, then the hangover’s going to be less agonising. From there, we can recover sooner and rediscover the things outside of the ratrace that make us happy in ways that mere stuff cannot.

When the corporation is the dominant institution and profit is the major motive for action, environmental degradation is inevitable. Earth Day, for all the consciousness it raises and measurable changes it registers, will always be about pleading with slavers to be kinder and imploring waves to recede. The growth economy will not permit anything else. Until we challenge and dismantle the myth of perpetual economic growth, we leave the engine of environmental destruction rocketing onwards.