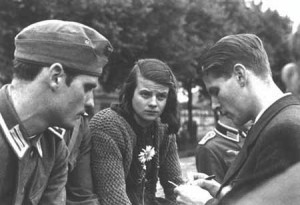 Seventy-six years ago today, three German students were executed by guillotine in Munich’s Stadelheim Prison for their crimes of high treason against Hitler’s Third Reich. Just four days earlier, 24-year-old Hans Scholl and his 21-year-old sister Sophie were arrested after they’d been caught throwing hundreds of anti-Nazi leaflets from the third floor of the main building of their Munich University campus. Upon interrogation, the Gestapo were shocked to discover that these young Germans – the very essence of the Hitler Youth ideal – were, in fact, the leaders of the infamous White Rose resistance movement whose unfathomably bold clandestine actions since the summer of 1942 had caused shockwaves throughout Germany.

In the darkest moment of humanity, here was a beacon of light! Non-violent and rooted in intellectualism, this impudent movement that had so outraged and outwitted the Gestapo was no more than a handful of Munich University students in their early twenties – inspired and aided by their professor of philosophy, Kurt Huber. Many had even once been members of the Hitler Youth and German Youth Organization, seduced by Hitler’s promises to rebuild and revitalise Germany. But once exposed to the horrors of the Nazi’s monolithic war machine and genocidal mania, these students refused to turn a blind eye and risked all to form an underground resistance. The White Rose mass-printed a total of six ingenious propagandist leaflets, in which they called for the active opposition of the German people to Nazi fascism and tyranny. Quoting Goethe, Schiller, Aristotle and the Bible, these fiery missives targeted Germany’s intelligentsia – imploring them to “rip off their cloak of indifference”:

“Why do German people behave so apathetically in the face of all these abominable crimes, crimes so unworthy of the human race? … The German people slumber on in their dull, stupid sleep and encourage these fascist criminals … through his apathetic behaviour he gives these evil men the opportunity to act as they do … he himself is to blame for the fact that it came about at all! Each man wants to be exonerated … But he cannot be exonerated; he is guilty, guilty, guilty! … Now that we have recognized [the Nazis] for what they are, it must be the sole and first duty, the holiest duty of every German to destroy these beasts.”

The sixth and final leaflet was triggered by the news of the German defeat at Stalingrad on 3rd February 1943. “Fellow students! The day of reckoning has come for the most contemptible tyrant our people has ever endured … The dead of Stalingrad adjure us!” Hans and Sophie Scholl volunteered to distribute this incendiary message around the university, intending for it to be discovered by students as they exited their classrooms. But when Sophie impulsively threw the remaining leaflets over the side of the 3rd-floor railing, the siblings were observed by a custodian who blew the whistle.

The Scholls, along with their fellow White Rose member Christoph Probst – a 24-year-old father of three – stood trial before the Third Reich’s notorious Volksgerichtshof, or “People’s Court”, on 22nd February 1943. In the face of certain death, the defendants displayed a beatitude-like composure and defiance. “Somebody, after all, had to make a start,” Sophie Scholl calmly responded when asked to explain her actions. “What we wrote and said is also believed by many others. They just do not dare express themselves as we did.” Judge Roland Freisler sentenced all three to death and gave them just three more hours to live. But the courage and righteousness of these young students even managed to touch the prison guards, who defied prison rules to allow them to share a final cigarette together. Sophie was the first to be led to the guillotine. She went without a whimper. As the blade was about to fall on Hans, he cried out: “Let freedom live!” The White Rose, however, had the last word when their final leaflet was smuggled to the Allies, who air-dropped millions of copies over Germany.

The White Rose lives on as a symbol of righteousness – its members remarkable and courageous young people whose example of honour is a radiant page in the darkest chapter of the 20th century. It is a grave insult that the academic Daniel Jonah Goldhagen cynically omitted their heroism from his would-be authoritative Hitler’s Willing Executioners: Ordinary Germans and the Holocaust – for these ordinary Germans were not willing. Martyrs for all humanity, they dared to resist and made the ultimate sacrifice. While we continue to recoil at the forever-shocking memory of Hitler and the depths to which humanity can sink, the White Rose is a poignant and powerful reminder of what we all can and should be.

We will not be silent. We are your bad conscience. The White Rose will not leave you in peace!

This entry was posted in Dissent, Heroes, Heroines. Bookmark the permalink.