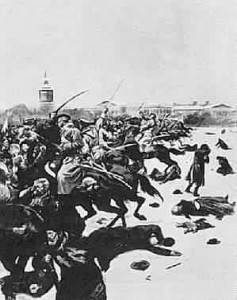 Bloody Sunday outside the Winter Palace

On this day in 1905, a seismic social shift occurred that would ultimately end Russia’s seemingly unassailable dynastical certainties – setting the stage for the new global force of communism. For nearly four hundred years, a succession of patrilineal descendents had ruled by “the Grace of God” as “Emperor and Autocrat of all the Russias.” The Tsar was the sole voice of the law, justice, taxation, the army and religious affairs. So entrenched was this age-old system of autocratic divine rule that – even with the rise of industrialisation in the late 1800s and a growing discontent amongst the cruelly exploited workers – Tsar Nicolas II was, at the beginning of 1905, still considered by nearly all of his subjects as their beloved “Little Father”. But that was all about to change in the wake of what would come to be known as Russia’s Bloody Sunday.

On 22nd January 1905, some 100,000 working-class men, women and children marched along the snow-covered streets of St Petersburg towards the Winter Palace carrying a petition that they aimed to present to the Tsar. Such was the absolute faith in their “Little Father” that the peaceful marchers believed if only he knew how wretched their lot was he would surely respond. And things were certainly very wretched in Russia. The ongoing Russo-Japanese War was proving a disastrous mistake; as the ill-equipped and poorly-trained Russian armies suffered increasingly humiliating and costly defeats abroad, back home transportation and communications broke down while bread prices soared and the wages of already exploited workers declined by 25%.  In this precarious milieu of labour unrest, a large-scale strike broke out at the Putilov plant in St. Petersburg when four workers were sacked; within days, some 100,000 disgruntled workers across the city had joined the strike. With the capital virtually paralysed, a Russian Orthodox priest – Father Georgy Gapon – hatched a plan to appeal directly to the Tsar. He composed a petition outlining the workers’ sufferings, collected over 150,000 signatures and organised the fateful march to the Winter Palace. Gapon and a delegation of intellectuals headed by the writer Maxim Gorky informed the authorities of the march and its peaceful intent. The authorities seemed entirely unperturbed: an order to arrest Gapon failed to be carried out, and Tsar Nicolas – vacationing outside the capital with his family – saw no need to return.

And so the crowd, dressed in their Sunday best and carrying portraits of the Tsar and the Orthodox saints, set out in columns for the Winter Palace to deliver their pitiable petition which read:

“Oh Sire, we working men and inhabitants of St. Petersburg, our wives, our children and our parents, helpless and aged women and men, have come to You our ruler, in search of justice and protection. We are beggars, we are oppressed and overburdened with work, we are insulted, we are not looked on as human beings but as slaves. The moment has come for us when death would be better than the prolongation of our intolerable sufferings. We are seeking here our last salvation. Do not refuse to help Your people. Destroy the wall between Yourself and Your people.”

As they approached the Winter Palace chanting “God Save the Tsar,” the crowd still naively believed they were the children of a benevolent father who would surely redress their grievances. But, without warning, Nicolas’s uncle – Grand Duke Vladimir – ordered the Russian Imperial Guard to open fire. Within moments, some 1,000 innocent men, women and children lay dead and injured. Father Gapon, who miraculously survived the slaughter, knew at once that only one person could be held accountable for the tragedy:

“At last the firing ceased. I stood up with a few others who remained uninjured and looked down at the bodies that lay prostrate around me. Horror crept into my heart. The thought flashed through my mind, ‘And this is the work of our Little Father, the Tsar.’ Perhaps the anger saved me, for now I knew in very truth that a new chapter was opened in the book of history of our people.”

As the news of the unprovoked massacre spread, shockwaves reverberated throughout Russia. Workers went on strike, troops were called in to control them, and Father Gapon – renouncing both the Tsar and God – called for revolution. The 1905 Russian Revolution challenged the autocratic power of Tsardom, forcing Nicolas to issue the October Manifesto – with its parliament, freedom of the press, assembly and association. Nicolas managed to retain power (and promptly reneged on his promises) – but, in the wake of Bloody Sunday, the Russians finally lost their venerable faith in the Tsar as the great and benevolent guardian of his people. And with that vital psychological leap, a socialist consciousness took hold. Twelve years later, Nicolas II was driven from power in a revolution that would forever change Russia and alter the course of the 20th century.

This entry was posted in Atrocities, Revolution, World Events. Bookmark the permalink.