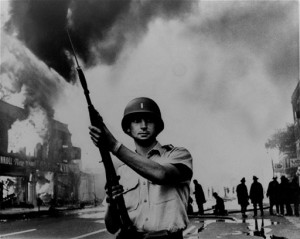 On this day in 1967, the Detroit police raided an after-hours bar in the city’s poor black ghetto where nearly 100 locals had gathered to celebrate the return of two African American soldiers from Vietnam. Typically in such raids, the cops would have arrested the proprietors and perhaps a few customers caught with illicit drugs. On this occasion, however, they arrested every single person – pushing and shoving, wielding their batons, and calling their prisoners “boy” and “nigger”. A few disgruntled onlookers started tossing insults at the heavy-handed officers, followed by bottles and stones. Within an hour, the melee had escalated into a full-scale riot as decades of pent-up hatred ignited and spread like wildfire across the central city. Los Angeles’s Watts neighbourhood had similarly exploded in 1965. Chicago in 1966. Tampa, Cincinnati and Newark earlier in 1967. But Detroit was the worst. Amidst ongoing violence, looting, arson, and gun battles, for the first time in a quarter-century, the U.S. Army was called in to contain civil strife. The week-long riot was the deadliest urban disturbance of the turbulent 1960s, resulting in 43 deaths, 1,200 injuries, more than 7,000 arrests, and in excess of $300 million in damaged property – destroying huge swaths of the city’s most impoverished neighbourhoods. Between the Michigan National Guard, U.S. Army paratroopers, the Michigan State Police and the Detroit Police Department, it took some 17,000 heavily armed men to put down the rebellion. Standing alongside 12th Street’s smouldering ruins, Detroit’s mayor likened the city to Berlin in 1945.

When the smoke cleared, genuinely bemused authorities were left wondering how Detroit had in one horrific week gone from being the hub of American industry – the Motor City, the “Model City” – to the disgraced host of the most devastating civil disorder America had ever seen. “What happened?” a shaken President Lyndon B. Johnson asked. Didn’t the black population of Detroit have the highest rate of home-ownership of any black urban area of the country? Hadn’t the auto industry provided unskilled black workers with higher-than-average wages? Such was the cluelessness at all levels. The stark reality was that since the post-Civil War mass influx of blacks to the manufacturing north, Detroit had restricted its “coloured” population to its oldest, most decrepit neighbourhoods. Segregation inevitably spawned discrimination. Schools in black areas were overcrowded and under-funded. Services were delivered sporadically. In the 1950s and 1960s, the urban black economy tumbled into crisis as factory work started to disappear. In the city’s ghetto, unemployment skyrocketed, poverty intensified, crime increased. Then the planners ploughed through the heart of black Detroit to make way for Interstate 75 so that affluent whites from the suburbs could get into the city more easily. It cut the black community in two, devastated local businesses and worsened the housing problem. Policing was beyond oppressive. The Detroit police force was nearly all white and more than half were known to be “extremely anti-Negro”. Gestapo-like, they’d stop blacks for no good reason, arresting those who couldn’t produce identification.

The oblivious President Johnson appointed a Special Advisor Commission on Civil Disorders to investigate the cause of the riot. Headed by Illinois Governor Otto Kerner, the Commission correctly concluded that America was sharply divided into two societies – one white, one black – which were separate and increasingly unequal. “Discrimination and segregation have long permeated much of American life; they now threaten the future of every American.” It advised the government to pour money into providing blacks with better jobs, housing and education. Johnson ignored the recommendations. Instead, in the aftermath of the riot, the white exodus to the suburbs of Detroit accelerated at an alarming rate. By the early 1970s, inner Detroit was almost entirely black. According to the 2000 Census, it remains the most segregated metropolitan region in the country with its 8-mile de facto cultural dividing line between the poor black city and its wealthier white suburbs. Half a century after de-industrialisation began, the city continues to haemorrhage jobs; Detroit has a higher unemployment rate than any other major American metropolitan area, with joblessness exceeding 50% in its poorest sections. One-third of Detroit’s population live below the poverty line. Its infant-mortality rate is comparable to that of the West Bank. The school system is almost completely segregated and criminally ineffective: only 22% of Detroit’s youth graduate from high school. The only trades that continue to flourish are drugs and crime. More than 20,000 Detroiters have been killed since the riot of ’67.

The Summer of Love completely bypassed Detroit, and the one-time “emblem of progress” would never recover from its Summer of Hate. After decades of decline, the Motor City declared bankruptcy in July 2013.