23rd August 1927 the Execution of Sacco and Vanzetti 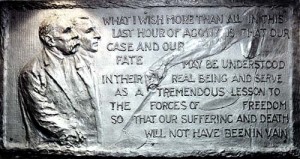 Memorial to Sacco and Vanzetti

On this day in 1927, the American State murdered two Italian anarchists in the despicable ‘electric chair’, after the two lost their six-year battle to clear their names of a crime they most certainly did not commit – and despite a long campaign of letters and petitions involving such world luminaries as HG Wells, George Bernard Shaw, Albert Einstein, Dorothy Parker and Upton Sinclair. The executions of Nicola Sacco and Bartolomeo Vanzetti – one a ‘poor fish peddler’, the other a shoemaker – exposed to the outside world the realities of America’s prejudices against ethnic minorities, against its poor and against anyone who dared to think unconventionally.

This peculiar and unsavoury saga had begun on 5th May 1920 when Sacco and Vanzetti were arrested on suspicion of “dangerous radical activities”. Soon the pair found themselves charged with the murder of two men in a Boston suburb, which had occurred the previous month during a bungled payroll robbery. But while awaiting trial for the murders, Vanzetti now found himself accused, tried and convicted of a different robbery entirely, the presiding judge Webster Thayer concluding: “This man, although he may not have actually committed the crime attributed to him, is nevertheless culpable, because he is the enemy of our existing institutions.”

Now, Judge Thayer really got the bit between his teeth, requesting that he be permitted to preside over the coming Braintree murder trial of Sacco and Vanzetti, which began in June 1921. In court, Vanzetti’s customers attested that he was delivering fish at the time of the crime, while the case against Sacca was based on conflicting ballistics evidence. Nevertheless, American paranoia driven by fear of Communists ensured that the seven-week trial dwelt more on the defendants’ political ideologies than the crime itself. With virtually no evidence to be discussed, the jury found the anarchists guilty in just three hours. Furthermore, the foreman of the jury, a retired policeman, commented to a friend who suggested that Sacco and Vanzetti might be innocent, “Damn them. They ought to hang anyway.”

Six years of legal battles ensued but every attempt failed to convince the Massachusetts Supreme Judicial Court that Sacco and Vanzetti deserved a re-trial. And on 9th April 1927, it was once again Judge Thayer who sentenced Sacco and Vanzetti to die in the electric chair. On being sentenced, Bartolomeo Vanzetti commented: “I am suffering because I am a radical, and indeed, I am a radical; I have suffered because I was an Italian, and indeed I am an Italian . . . but I am so convinced to be right that you could execute me two times, and if I could be reborn two other times, I would live again to do what I have done already.”

Having been incarcerated in different prisons for six years, Sacco and Vanzetti were now reunited in Charlestown State Prison to await their fate. And, as the executions approached, Massachusetts was inundated with thousands from all over America who turned out to demonstrate against this injustice. Worldwide, protesters burned American flags and destroyed anything American-made. Just after midnight on 23rd August 1927, Sacco was led to the electric chair, where he cried out in Italian: “Long live anarchy!” Then he spoke his final words: “Farewell my wife and child and all my friends”; then he called out to his “Mama” before falling silent. Vanzetti, who throughout his ordeal had touched his supporters with his dignity and poignantly poetic ruminations, paused inside the death chamber for his final statement: “I wish to say to you that I am innocent. I have never done a crime, some sins, but never any crime. I thank you for everything you have done for me. I am innocent of all crime, not only this one, but of all, all. I am an innocent man.” He then shook hands with the warden, two guards, and prison doctor. As he took his position in the electric chair, his last words were: “I now wish to forgive some people for what they are doing to me.” He was crying as the signal was given to end his life.

Fifty years after their executions, Massachusetts Governor Michael Dukakis signed a proclamation declaring, “Any stigma and disgrace should be forever removed from the names of Nicola Sacco and Bartolomeo Vanzetti. We are not here to say whether these men are guilty or innocent. We are here to say that the high standards of justice, which we in Massachusetts take such pride in, failed Sacco and Vanzetti.”