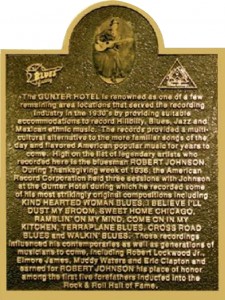 The Robert Johnson Commemorative Plaque at the Gunter Hotel

On this day in 1936, the legendary bluesman, Robert Johnson, made his recording debut in room 414 of the Gunter Hotel in San Antonio, Texas – one of only two recording sessions he would make in his short life, but whose sounds would ignite the entire post-war world, and – as the so-called devil’s music did its stellar work – signified the final stages of the re-paganising of Christendom.

One Response to 23rd November 1936 – Robert Johnson Lays It Down