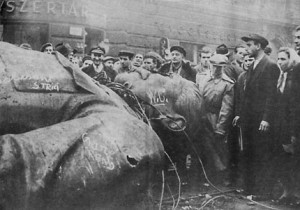 Today marks the anniversary of the Hungarian Revolution of 1956 – the first major anti-Soviet uprising in Eastern Europe and the first armed battle to occur between socialist states. It began spontaneously on the morning of 23rd October when 20,000 students delivered a 16-point manifesto to Hungary’s communist leadership, calling for an end to Soviet occupation and the implementation of “true socialism”. By nightfall, the demonstration on the streets of Budapest had grown to some 200,000 strong – and, the hitherto peaceful protest turned into a revolution proper when, after the secret police opened fire on the protesters, the Hungarian Army tore the red stars off their hats and joined the demonstrators in seizing control of the city. In what must be two of the most potent symbols of defiance in the Soviet era, the Hungarians then toppled the 30-foot-high bronze statue of Stalin and reclaimed their flag by cutting out the circular communist coat-of-arms from its centre. The next day a new government under the leadership of communist reformer Imre Nagy was declared – and the citizens of Budapest erected defensive barricades as Russian tanks began to roll in. But the military intervention under the Soviet Union’s new leader, Nikita Khrushchev, was surprisingly and uncharacteristically hesitant. Khrushchev’s speech earlier in the year to the 20th Soviet Communist Party Congress exposing and denouncing Stalin’s Terror had torn the benign mask from the face of ‘the great leader of progressive mankind’, and Moscow’s omnipotence was undermined as seeds of progressive reform were planted throughout the Soviet bloc. It was in this strange intermediate milieu that Nagy, remarkably, appeared to succeed in negotiating with Khrushchev. And although violent street fighting continued throughout all of Hungary, the tanks retreated from Budapest. As America’s Radio Free Europe broadcast hope and encouragement to the freedom fighters and implied that help would soon arrive, by the end of October an emboldened Hungary – believing victory was theirs – announced its plan to withdraw from the Warsaw Pact.

But Western help never arrived. And, on November 4th, the Soviets rolled back into Budapest with 5,000 tanks. Khrushchev had reversed his decision – there was to be no warming period in the Cold War. Over 4,000 Hungarians were killed as the Soviets violently suppressed the revolt and retook the country – hundreds more, including Nagy, would later be executed – while over 200,000 were forced to flee via Austria, draining Hungary of its intelligentsia for generations to come. By November 10th, the Hungarians’ dream of liberty was crushed as the last pockets of resistance surrendered.

Might a Soviet decision to not intervene have meant the end of communism in Eastern Europe in 1956, as it did when Mikhail Gorbachev stood aside in 1989? We can only speculate. What we do know is that this watershed event in the Cold War so comprehensively reaffirmed the Soviet Union’s oppressive imperialism that there would be no further significant uprisings amongst its European states for over a decade. And, after America had vigorously and sanctimoniously defended West Berlin in 1948–1949, the self-appointed world police shamelessly exposed its own true nature by betraying Hungary in favour of its more fiscal interests in the Suez Canal.