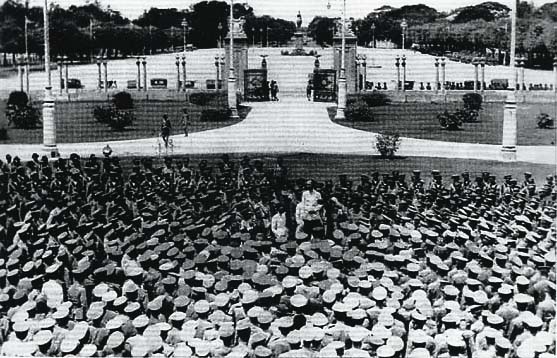 The People's Party address the crowd at the Royal Palace, Bangkok

At dawn on June 24, 1932, a small group of Bangkok intellectuals launched a revolution – seizing control of the army and imprisoning royal officials. By noon, they’d persuaded King Prajadhipok to surrender his autocratic power – thus ending almost 700 years of absolute rule of Kings, and bringing Thailand, then Siam, into the era of democracy.

In 1932, Siam was a country in crisis. The global Great Depression had brought the only South Eastern Asian nation never to be colonized to the brink of bankruptcy as rice prices fell by more than 60%. The country was also undergoing a dramatic social change as the budding urban middle classes of Bangkok became increasingly frustrated with their lack of opportunities under an ineffective, corrupt and archaic government.

Against this backdrop of discontent, in February 1927, a group of seven Siamese students met at a hotel in Paris and founded what would become the Khana Ratsadon, or the People’s Party. For five days they thrashed out a new vision for Siam, based on Western notions of democracy. But they realised that the Siamese masses – mainly illiterate peasants – were not yet ready for democracy, let alone revolution. The taking of power, they reasoned, would be possible only by a military-led coup d’état.

The students returned to Siam to promote their vision of change, and – brilliantly – called themselves “the Promoters”. Over the next three years, the Promoters built up a revolutionary following of 102 students, non-royal government officials and military officers.

On the fateful day of 24th June, military units of the People’s Party secured all of Bangkok’s strategic locations. Standing on the podium of the city’s royal pavilion, one of the Promoters read out their revolutionary manifesto – accusing the king of embezzling funds, nepotism and governing without principle. The speech was broadcast over the radio while supporters of the movement blanketed the capital with flyers and pamphlets. The People’s Party then invited the king to retain his position under a constitution. King Prajadhipok – fearing for his life – agreed.

It took just six hours for a mere 102 people to topple a 700-year autocratic regime.

And so, revolutionaries of today – take heart! Yes, the sad truth is that less than 1% of the so-called 99% give a fuck. But that’s enough! As Fidel Castro said:

I began revolution with 82 men. If I had to do it again, I do it with 10 or 15 and absolute faith. It does not matter how small you are if you have faith and plan of action.