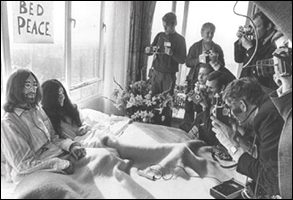 The newspeople said, "Say, what you're doing in bed?" I said, "We're only trying to get us some peace"

On 25th March 1969 Yoko Ono and John Lennon staged their first ‘bed-in’ for peace. Married five days earlier in Gibraltar, the Bed-In for Peace at the Amsterdam Hilton – inviting the world’s press to come and interview them about war and peace – was their version of a honeymoon.

Yoko brought to John the realisation that there are many methods of artistic expression available and, beyond that, the artist has an obligation to be relevant as well as challenging, to act outside of the enclave of their medium.

John had been in the eye of one of the greatest celebrity storms ever seen. Television only became a part of ordinary people’s lives in the early 60s. He’d quickly learned that when the mass media take an idea they will amplify and simplify it. Subtlety and nuance get lost, ambiguity and the loss of context can change everything. His ‘bigger than Jesus’ comment was made one drunken evening at a club, and yet a year later it came back to bite him thousands of miles away with record burnings and death threats.

They knew a message needed to be something simple, yet novel and inventive that would catch the eye and at a glance speak of radically different values. Yoko’s sparky avant-garde approach informed the decision; a white visual aesthetic with placards around. For hour after hour, day after day, they fielded any question.

When The Beatles were asked to write a song for the world’s first satellite TV link-up two years earlier, John had written ‘All You Need Is Love’; it had been composed deliberately to translate easily and unambiguously. So two years on he and Yoko decided that their message must be the same point but more robust and even more straightforward: Peace.

The Vietnam War was raging. Several years earlier John had sent back his MBE in protest but that was reaction; Yoko and he knew there also needed to be pro-active action. The media, the politicians and all the other overamplified voices at best accepted and normalised the war, the same way they do today when troops being paid to fuck over the Iraqi or Afghan people are routinely referred to as ‘heroes’.

To have voices in the midst of that cry ‘peace’ shifted the debate. The parameters moved away from should or shouldn’t the UK send troops, or what level of bombing is acceptable, and instead became war versus peace. Not that Ono and Lennon’s voices were the first or only ones for peace by any means; but they pulled the mass media culture towards it, they took it further out of the news bulletins.

“So we would sell our product, which we call ‘peace’. And to sell a product you need a gimmick, and the gimmick we thought was ‘bed’. And we thought ‘bed’ because bed was the easiest way of doing it, because we’re lazy. It took us a long train of thought of how to get the maximum publicity for what we sincerely believed in, which was peace.”

Of course, two people lying in bed in their pyjamas, even ones as observed as John and Yoko, were not going to stop the war. Its impracticality expresses that futile feeling we have as war rages on in our name. Moreover its method – of patience, clarity, calm – spoke vividly of the values we need to overcome war.

The couple also expressly said that the new tools of mass communication were abused in selling us war and consumer junk. If they work so well – as they undeniably did – then they could be used to promote peace.

Their campaign continued with billboards in major cities. It had to be plain and straight, both in the message and in the form. The posters were plain black-and-white in an unserifed font like a tabloid headline. WAR IS OVER (IF YOU WANT IT). As simple as any other advert but a message that, in that context, shocks the viewer.

And yet, though it’s simple, it’s not simplistic. That bracketed bit – (if you want it) – tells us it is in our hands. Our leaders try to tell us that we are powerless, that the power they hold is theirs by right, that we’re too stupid to exercise it, whereas John and Yoko’s billboards said that the only power our leaders have is power we cede to them. It stands as one of the great slogans of all time, tackling a titanic perennial blight with the sense of possibility and personal power necessary to create hope.

Two months later they staged a second bed-in in Montreal where they recorded ‘Give Peace A Chance’. In October it was taken up as the anthem of half a million protesters against the Vietnam War in Washington, rallying and affirming their stance. It has been heard on the streets around the world ever since.

This entry was posted in Dissent, Heroes, Heroines, World Events. Bookmark the permalink.