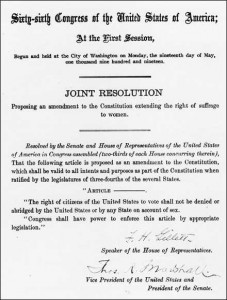 Lest we forget that a mere century ago the world was still so entirely male dominated that we women were not even allowed to vote. While our most adventurous brothers were becoming heroes of the so-called Free World by flying planes from the USA to the United Kingdom, their respective spouses still hadn’t even gained the right to participate in elections in those two countries; until today, that is. For it was on this day 26th August 1920 that the US government finally adopted the 19th Amendment, at last guaranteeing women the right to vote and thus ending the struggle for American women’s suffrage which had officially begun long before back in 1848.

This is therefore a day to commemorate a hard-fought victory for women’s rights and a chance to celebrate the monumental heroism of American suffragists. But – and I direct this particularly at mothers with daughters – we should also pause to consider the debt of responsibility we owe these heroines. Elizabeth Cady Stanton, Susan B. Anthony, Lucretia Mott, Lucy Stone and Alice Paul, the name of every one of them should be invoked by 21st-century women if not daily then at least regularly; certainly often enough for each of us never to forget what these American suffragists put themselves through in order that the 19th Amendment should finally come to pass. As Frederick Douglass said at the historic Seneca Falls Convention of 1848, “In this denial of the right to participate in government, not merely the degradation of woman and the perpetuation of a great injustice happens, but the maiming and repudiation of one-half of the moral and intellectual power of the government of the world.”