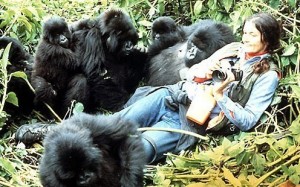 On this night in 1985, Dian Fossey – legendary zoologist and champion of Africa’s mountain gorillas – was brutally murdered in the bedroom of her isolated cabin, high in Rwanda’s Virunga Mountains. Her lifeless body with its skull split open was discovered the following morning: evidence of violent struggle then murder by machete. What had prompted this despicable act, perpetrated against so famous an animal lover? The Western world was shocked, outraged by the murder. For, through her efforts to publicise the plight of the gorillas in National Geographic magazine articles and her bestselling book (and future Hollywood blockbuster) Gorillas in the Mist, Dian Fossey had become a famous heroine. In America, her work with the gorillas had become so celebrated that the illustrious newsreader Walter Cronkite had even reported the murder of Fossey’s favourite gorilla, Digit, as the leading story on CBS Nightly News. And yet Dian Fossey had died in that same brutal manner as the gorillas she had come to save. Bemused outsiders and observers from the foreign media wondered how had it come to this?

Those who knew and worked with Dian Fossey, however, were far less surprised by the tragedy. For they all understood that her unknown murderer could have been one of a multitude of enemies that Fossey had amassed throughout her single-minded, even fanatical one-woman mission to save her beloved mountain gorillas from the brink of extinction. When she had first arrived in 1966, Fossey had discovered less than 100 gorillas living on the mountains – their fragile colony threatened on all sides by zoo collectors, poachers, herdsmen, scientists and corrupt law enforcers. However, with a superhuman determination and struggling against the forces of torrential rains, witchcraft, political revolution and gorilla poachers, Fossey had single-handedly – by the time of her tragic murder – increased the gorillas’ numbers to 150. But it was the belligerent manner in which Fossey had defended her gorillas, however, which had caused so many silent vendettas against her. For Fossey’s attachment to these great and gentle Higher Primates had quickly become so obsessive that the war she waged on their behalf was often criticized for its lack of diplomacy, as she high-mindedly ignored Rwandan funding laws and the opinions of its local politicians. When local herdsmen exerted their age-old rights to graze cattle on “her” mountain, Fossey simply shot their cattle. But her greatest battle was with the poachers, who – by selling a gorilla skeleton to a university and its hands to tourists – could earn up to $200,000 for one single victim. At first, Fossey was content to destroy the poachers’ traps. But after Digit died during a particularly traumatic spate of gorilla murders, Fossey stepped up her fight by terrorising the poachers in their own villages.  Dian Fossey’s rabid determination to protect that which she loved had turned this brilliant and committed scientist into a stubborn and formidable Warrior – an obvious target.

Dian Fossey was born in California in 1932, and would later recall: “I had this urge, this need to go to Africa from the day I was born.” She fulfilled her destiny under the auspices of famed anthropologist Dr. Louis Leakey, spending eighteen years of groundbreaking research in the most challenging conditions 10,000 feet above sea level in the remote volcanic mountains in east Africa shared by Zaire, Rwanda and Uganda. And although her scientific research would become eclipsed by her conservation efforts, it is always to be remembered that Dian Fossey was – first and foremost – the world’s premier authority on the mountain gorilla. And after years of patient work which famously involved mimicking the habits and submissive behaviour of her fifty-one subjects, Fossey claimed her first major breakthrough in 1970 when one of the gorillas whom she had named Peanuts touched her hand: this was to be the first friendly contact ever recorded between humans and gorillas. A particularly poignant example of her extraordinary success and the trust she painstakingly established occurred when a young gorilla named Coco, orphaned by poachers, climbed on her cabin bench, looked out the window to the forest and began to sob.

However, due to the efforts of the Dian Fossey Gorilla Fund International – the non-profit conservation charity which Fossey established in 1978 – there are today some 320 mountain gorillas living in the Virungas: precisely half the world’s population of these extraordinary animals. Fossey had witnessed the violent murders of dozens of gorillas at the hands of poachers. But since her death, there have been only two known killings. Fossey was buried in the graveyard that she established for the murdered gorillas, where she lies alongside her beloved Digit and more than a dozen others. And in 1990, the Rwandan Government, who had for years ignored Fossey’s pleas to protect their mountain gorillas, finally recognized her enormous scientific achievement with their posthunmous presentation to Fossey of their prestigious Ordre National des Grandes Lacs – the highest award ever given to a foreigner. Verily, Dian Fossey’s relentless struggle did not merely bring the plight of an endangered species to the attention of the world; she died a martyr for their cause.