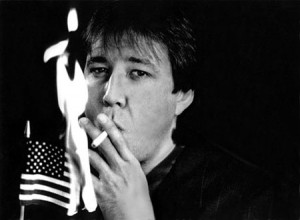 "I left in love, in laughter, and in truth, and wherever truth, love and laughter abide, I am there in spirit."

Do you remember where you were when you heard the news that Bill Hicks was dead? I was at the corner of Kentish Town Road and Hawley Road, on my way to a pub in Camden Town. My friend Justin came up behind me and tapped me on the shoulder. I could clearly see something was wrong when I turned to look at him. He just said, flatly, “fuck man, Bill Hicks is dead”. He might as well have punched me in the stomach.

To those of us who got him, Hicks was far more than just a stand-up comedian. He was an inspirational figure; a voice of truth and sanity in an increasingly false and insane world. He spoke truth to power like almost nobody else of our generation. Militant yet deeply compassionate, when Bill Hicks took to the stage he transcended the safe and empty art form that comedy had descended to by the late 80s and early 90s. “Comedy is the new rock’n’roll”, we were being told by the media, but that was just bullshit… a marketing slogan. Yes, stand-up comedy was now happening in arenas and comedians had adopted the swagger of rock stars. And yes, some of them were even quite funny; credit where it’s due. But while it adopted the swagger of rock’n’roll, stand-up comedy hadn’t captured the danger… the threat of cultural revolution… the righteous assault on the pillars of the establishment. While much of rock’n’roll had been co-opted by the mainstream, the new wave of stand-up was never genuinely outside it.

Born into a conservative Christian family in Texas, Bill Hicks was both a product of his environment and an escapee from it. His style was heavily influenced by the Baptist preachers who harangued him from the pulpit, but the content was a world away. “Chomsky with dick jokes” was how he once described himself, but that doesn’t even begin to capture the essence of Bill Hicks. Every night he would climb on stage and assault his audience with a barrage of truth. He made it as funny as it could possibly have been, but the communication of ideas was far more important to Hicks than the generation of laughter, or the security of a regular pay-cheque. Which – needless to say – didn’t make him the most popular of comedians on the US circuit. Booed, heckled, and on more than one occasion physically threatened with violence by his audience, Hicks nonetheless remained steadfast in his fearless belief that it was more important to shake people up than merely entertain them.

Which is not to say that Bill Hicks wasn’t entertaining. It would not have been enough for him to be some kind of secular preacher. What made Hicks truly great, and gained him the following that he still retains almost two decades after his untimely death, is just how genuinely funny his material was. Whether he was skewering the hypocrisy of mainstream religion, or offering burning insight into American foreign policy. Whether discussing pornography, the war on some drugs or the pro-life/pro-choice debate, those on the same wavelength as Hicks were always laughing. And we can only hope that those not on that wavelength had an occasional seed of doubt sown in their existing world view.

Watching Bill Hicks on stage was like being part of a shamanic ceremony. He exorcised demons up there. Ours. And his own. He would often conjure up extremely violent images to shock an audience out of their comfort zone. Or he’d exploit our cultural hang-ups about sex to do the same. Not just pushing the boundaries but smashing them down completely. It can’t be stressed enough though, that these were not merely the tactics of the shock-jock, aimed at producing notoriety and a media buzz. With Hicks it was all about that sharp realignment of perspective that allows us to see through the illusions of our corrupt and mediated reality to an underlying truth.

The now-famous incident of his set being cut from The Late Show with David Letterman rightly angered Hicks. But it always amazes me that he was so surprised by it. Because it demonstrated perfectly many of the truths he tried to impart; that the mainstream media is not interested in anything that might genuinely challenge the status quo. That the twin functions of that media – to maintain a compliant populace and increase corporate revenues – will not tolerate opposition.

Hicks ultimately found a bigger audience in the UK, Ireland and Australia than he would ever do in his home country. His tirades against consumerism and marketing went down slightly better in places that didn’t automatically view attacks on capitalism as tantamount to treason. And while he certainly had a small but dedicated following in the United States, he always faced the stark choice of toning down his material or alienating a large proportion of his audience. And given those options, he just wasn’t the kind of guy to choose the former.

For many of my generation, Hicks was a powerful beacon of love, laughter and truth. Despite the darkness in his act – and there was plenty – it always resolved itself into something powerfully positive. An inspirational catharsis and a reminder that there’s no rule that forces us to walk the path of fear. It’s a choice. And we have it within us to make a different one.

Bill Hicks died of pancreatic cancer at the age of 32. His voice is sorely missed.