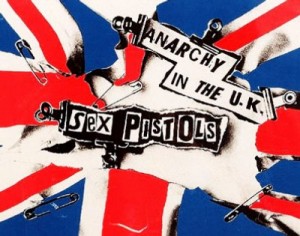 Today we celebrate the release of the Sex Pistols’ debut 7” single ‘Anarchy in the UK’ which caused a public outcry when it first appeared 41 years ago, and heralded the entire regeneration of ‘70s rock’n’roll. A riotous wake-up call from the opening salvo of Steve Jones’ Les Paul fanfare and ye hectoring cackle of J. Rotten’s Dickensian ‘Right Now’, ‘Anarchy In the UK’ dragged its stunned listeners along on a post-Neu 75 autobahn boogie, a mekanickal Chuck Berry burn-up full of such turbocharged heft that other punk groups thereafter sounded transistorized in comparison.

But what made ‘Anarchy in the UK’ so radical and so revolutionary was the shrewd manner in which it appropriated several hoary Old Guard devices – the epic guitar ramalama, the key change into the clamorous guitar solo, the ringing feedback over the cajoling final verse – over all of which was spewed the Shockingly New: savage political bile of the Abiezer Coppe/Ranter variety. It was as though Ken Russell had dragged some feral boy out of the woods and had him declaim 17th century refusenik tracts over music by the all-time best Detroit rock band. Better still, this particular feral boy expectorated on stage, complained that sex was tiresome and even claimed to hate the music that had just earned him thousands from EMI Records. To the wartime generation, the careering & tuneless warcry of this 21-year-old ingrate leader of the self-professed Blank Generation was evidence of a world finally turned upside down.