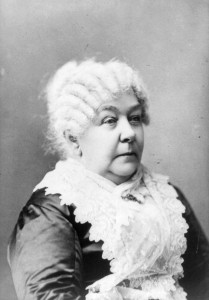 Today we pay tribute to Elizabeth Cady Stanton, fearless pioneer of the American women’s rights movement and the first American feminist to synthesise the arguments for women’s equality in employment, income, property, custody and divorce. As the organiser of the first US women’s rights convention in 1848 at Seneca Falls, author of the Declaration of Sentiments – the first public statement calling for women’s suffrage – and co-author of the monumental six-volume History of Woman Suffrage, Elizabeth Cady Stanton’s position as the leading light of the American feminist movement should be assured. But that honour has been bequeathed to her great friend and political ally, Susan B. Anthony, as Elizabeth’s ideas remain too radical for the acceptable narrative of the history of women’s rights. Many of her own sisters felt betrayed by her lack of solidarity for the 15th Amendment calling for black male suffrage, which Elizabeth refused to support separate from and in advance of voting rights for women – leading to a serious schism within the women’s suffrage movement. But it was the 1895 publication of her highly controversial The Women’s Bible – in which the formally educated Elizabeth Cady Stanton dared to go directly to the source of women’s inequality exposing the sexism of the Judeo-Christian bible – which so comprehensively shocked and alienated her suffragette sisters. She was henceforth marginalised from the very movement she founded to such an extent that her legacy has yet to fully recover. Her progressive views, however, proved to be right – and, in the last two decades, Elizabeth Cady Stanton has begun to take her rightful place alongside Susan B. Anthony as the pivotal leader of the American feminist movement.

Elizabeth would not live to see American women get the vote, for that was still another gruelling eighteen years away at the time of her death aged 86. Her finest hour is deserving of its own entry further along in On This Deity’s alternative calendar, but on this 112th anniversary of the passing of this great heroine, let us remember her with the reverence she deserves.