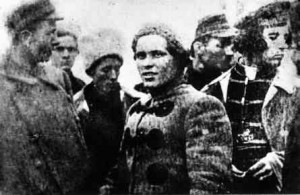 On this day in 1919 , anarchist leader Nestor Makhno – outrun, outnumbered and outmanoeuvred – led his Revolutionary Insurrectionary Army of Ukraine (otherwise known as the Black Army) to the unlikeliest of victories over the anti-revolutionary and vastly superior White Army in a battle that would prove to be the pivotal turning point in the Russian Civil War. Some historians have even suggested that with this victory, Makhno – a semi-literate peasant and erstwhile bandit – might have decided the fate of 20th century Russia. For, against all conceivable odds, this Black Army comprised primarily of Ukrainian peasants not only entirely routed General Denikin’s elite imperialist forces, but they subsequently destroyed the White Army’s key ammunition base, artillery depot and severed railway lines – thus terminating Denekin’s seemingly unstoppable advance toward Moscow, where the seizure of power from the Bolshevik government had for some time appeared inevitable. Instead, the Bolsheviks were able to send in their Red Army to the weakened lines, thwart the White advance and consolidate their post-Revolution position. In return for Makhno’s decisive victory, the Bolsheviks would betray the anarchists and unleash their Red Terror upon them. But while we’ll save the Bolshevik Betrayal for another day, let’s pause for a moment to instead recall an extraordinarily unlikely moment of heroic audacity which, unsurprisingly, has been virtually erased from Soviet history.

Makhno’s Insurgents had been on the run for weeks. Virtually out of supplies and burdened by their wounded, they’d been pursued for over 600km from their base until Denekin’s Whites finally managed to completely surround the retreating Black Army near the village of Peregonovka in central Ukraine. On the morning of 26th September, Denekin launched an all-out attack: his orders were the complete annihilation of the Ukrainian rebels. The exhausted  peasant soldiers were no match for the elite cavalry regiments and, with no path of escape, Makhno’s men could do little more than prepare to die. But just as all seemed lost, a black flag appeared out of nowhere from behind a hill. Moments later, Nestor Makhno – along with 200 of his finest handpicked Insurgents – burst into the enemy’s flanks. The counterattack was such a complete surprise that Denekin’s men were seized with panic. And, with an unstoppable fury, Makhno took the offensive. The cornered Insurgents were equally surprised by their leader’s Valkyrie-like arrival, but were quick to respond, collecting whatever weapons the enemy abandoned in its flight. Unable to regain the advantage, the White Army was forced to retreat – most would die whilst trying to escape by swimming across the Sinyukha River.

By the end of the day, the improbable rout was complete – and the course of Russia’s civil war, and the twentieth century, was forever altered. That Makhno had unwittingly paved a clear path for a monstrous regime should in no way undermine his spectacular underdog military victory.