28th April 1945 the Execution of Mussolini 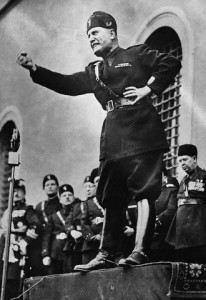 On this day in 1945, Italy’s fascist dictator Benito Mussolini was summarily executed by communist partisans and his body brutalised, violated and hung up for public display in Milan’s Piazzo Loreto – as ignominious a death as any of those Caesars he had so wished to emulate. Unfortunately for Italy, Mussolini’s attempt to recreate the Roman Empire had come at far too high a price – his vicious aerial gas bombardments in North Africa causing outrage among the Western powers, his over-confident military adventures far too often resulting in disastrous casualty levels, his armies the laughing stock of Europe. Caught in his desire to validate his new regime and even to take on the might of Britain’s sea empire, the blundering Mussolini inevitably fell into the arms of that very Mussolini Wannabe himself – Adolf Hitler, whom the Duce had initially scorned and dismissed as a “silly little monkey”. Too fearful of the Western powers but too much of a scavenger to risk missing out on fascism’s oncoming tyranny, the Duce found himself the lapdog and stooge of Germany’s Nazi leader. That his time ran out just 48 hours before Hitler’s own suicide must inevitably cause us to ask: was humanity of the early 20th century not perhaps the victim of some huge awful cosmic prank?

One Response to 28th April 1945 – the Execution of Mussolini