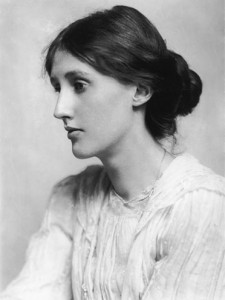 On 28th March 1941, 59-year-old visionary feminist writer Virginia Woolf walked into the river Ouse with stones in her pockets and drowned herself.

A note to her husband Leonard said: “Dearest, I feel certain that I am going mad again. We can’t go through another of those terrible times. I can’t fight any longer. I can’t go on spoiling your life. I don’t think two people could have been happier than we have been. V.”

In 1917, she and her husband Leonard founded their own publishing house, The Hogarth Press, where she enjoyed and took full advantage of unique creative freedom.

Her characters challenge the role of women in society and ask questions about feminism, war, mental illness, even language itself. She experimented with stream of consciousness, blurring direct and indirect speech. Her novels are engrossing, complex and challenging, and force you to engage completely with the language to work out what is happening.

Woolf and her husband were part of the Bloomsbury set, a group of intellectuals, philosophers and artists who practiced sexual freedom. Woolf had a sexual relationship with the writer Vita Sackville West and explores this theme in her 1925 novel Mrs Dalloway.Clarissa Dalloway appears on the outside to be the ideal bourgeoisie housewife but on the inside she has strong sexual feelings towards her friend Sally Seaton.

Woolf believed that writers had to reach the state of an ‘androgynous mind’ to be a great writer, beyond the conformities of either sex. It doesn’t matter that Sally Seaton is a woman – the attraction is between two people not two women. By challenging gender stereotypes, Woolf’s truly revolutionary view shines through: true equality overcomes gender altogether.

Woolf’s 1929 essay A Room of One’s Own has become a term in its own right to mean the space a woman needs to be creatively free. In it she said: “A woman must have money and a room of her own if she is to write fiction.”

Woolf saw that while women were merely supporters of their husbands, they could never be creatively free. This may not seem radical now but this was written in a world dominated by the patriarchy. British women had only been granted the same voting rights as men the previous year. She wrote: “Women have served all these centuries as looking-glasses possessing the magic and delicious power of reflecting the figure of man at twice its natural size.”

So why would a successful, sexually liberated, creatively free woman kill herself?

Woolf suffered from many tragedies in her life that triggered bouts of mental illness – the death of many close family members when she was only a child, the trauma of the First World War, and then the loss of her London home in the Blitz. By 1941, Woolf’s debilitating, self-consuming mental illness had reached tipping point. Unable to write, she needed to sacrifice herself to free herself and Leonard from the illness.

Woolf’s work enjoyed renewed popularity in the 1970s with the rise of feminism. It wasn’t until then that the world was ready to truly hear what she was saying. A lyric in Beautiful Freak by the Eels goes: “One day the world will be ready for you. And wonder how they didn’t see.” Virginia, the world is ready for you now and I hope you would be proud that the rest of us finally caught on.

As I write this in a room of my own, on my own laptop that I bought with my own money, I understand how much today’s women owe to Virginia. And that even in 2014 we are still a long way from Woolf’s vision of true equality.