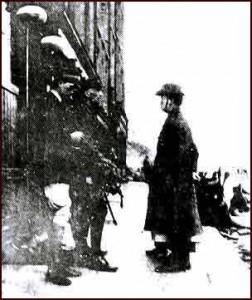 On the 29th April 1916 poet, teacher and revolutionary, Pádraig Pearse, issued the following statement from a beseiged building on Dublin’s Moore Street,

In order to prevent the further slaughter of Dublin citizens, and in the hope of saving the lives of our followers now surrounded and hopelessly outnumbered, the members of the Provisional Government present at headquarters have agreed to an unconditional surrender, and the commandants of the various districts in the City and County will order their commands to lay down arms.

It signalled the end of the Easter Rising, the most significant campaign in the struggle for Irish independence since the rebellion of 1798. The Rising had left large parts of the city decimated and resulted in thousands of casualties. It was also, unambiguously, a spectacular military failure. And yet it was the spark that lit the fuse on the War of Independence which would, within five years, force the British government to the negotiating table to discuss the terms of Irish independence.

Five days prior to Pearse’s declaration of surrender, on Easter Monday 1916, three revolutionary organisations – under the command structure of the Irish Republican Brotherhood (IRB) – executed a plan a long time in the making. Controversially, the leaders of the movement knew even at the outset that the plan was doomed to failure. The IRB had struck a secret deal with Germany, and were expecting to receive a shipment of arms and ammunition with which to kick off the rebellion. The ship, however, was intercepted by the Royal Navy and scuttled. Despite this, the Army Council of the IRB decided against cancelling the rebellion in the hope that – despite being completely ill-equipped to take on the British military – their actions would spark a mass uprising among the population.

At midday on that fateful Monday, Pádraig Pearse’s Irish Volunteers, James Connolly’s Irish Citizen Army and Kathleen Lane-O’Kelley’s Cumann na mBan (Irishwomen’s Council, a women’s paramilitary organisation) numbering about 1,200 men and women marched openly through the streets of Dublin. Badly armed and completely unprepared for what was to come, the rebels then divided into several units and took up positions around the city. The General Post Office (GPO) on Dublin’s main thoroughfare, O’Connell Street, was the first location seized and served as the headquarters of the Rising. It was here that the rebels raised the flag of the Republic and Pearse read The Proclaimation of The Irish Republic to a small crowd of curious onlookers.

Within minutes the other units sprang into action. Ned Daly’s 1st Battalion stormed The Four Courts, another central landmark and symbol of British Justice in Ireland. The 2nd Battalion under Thomas MacDonagh seized the Jacob’s Biscuit Factory just south of Dublin Castle while Éamon de Valera’s 3rd Battalion took control of Boland’s Mill, overlooking the docks. A number of other locations were fortified and for the remainder of that first day the unprepared British forces were forced to fall back to their own positions under a hail of gunfire.

This early success was to be short-lived however. Pearse and his comrades were dismayed to discover that far from sparking a mass uprising, their actions had alienated much of the city’s population. Stories of ordinary people cut down in the crossfire spread quickly and two notorious incidents in which rebels deliberately shot civilians for failing to follow their orders ended any possibility of popular support.

Martial law was declared the following day and Brigadier-General William Lowe was placed in charge of the city. Rather than ordering his Dublin garrison into combat, which he regarded as fighting the rebels on their terms, he called for reinforcements and heavy artillery. By the end of the week there were more than 16 thousand British troops in the city. Artillery had been set up in two locations and a gunboat brought up the River Liffey. The main rebel positions saw very little combat until the very end. Instead they were surrounded and mercilessly shelled from a distance. O’Connell Street, the Four Courts, Boland’s Mill and the Biscuit Factory – plus the areas around them – were reduced to rubble. Artillery barrages were also targeted on several other districts when rumours of rebel activity reached the British High Command. It was this tactic that resulted in the vast majority of the casualties sustained during the Easter Rising.

After the big guns fell silent, British troops stormed the weakened rebel positions. It was then that the fighting was fiercest and casualties were taken on both sides. Atrocities were carried out by British forces in retaliation for casualties sustained, most notably the North King Street massacre in which 15 civilians were murdered as a reprisal for a rebel ambush that left 11 soldiers dead. Elsewhere the pacifist activist Francis Sheehy-Skeffington, along with five others, was executed by British troops when he tried to mediate between a rebel group and the forces besieging them. It was acts such as these, along with what happened to the rebels who surrendered, that was to turn this military disaster into a victory for the independence movement.

Emerging from their fallback position in Moore Street where they’d been forced to flee when the GPO had been stormed, the rebels were rounded up and arrested. As word of Pearse’s surrender filtered through to the other positions, they too laid down arms and were taken into custody. Only de Valera’s decimated Battalion refused to admit defeat upon hearing the news, but another round of artillery fire soon forced his hand. So by the night of Sunday 30th April 1916, less than a week after Pearse had proclaimed an Irish Republic on the steps of the GPO, the Easter Rising had been crushed.

Much of the city was in ruins. Or in flames. Or both. The initial anger felt by the population towards the rebels began to be redirected towards the British forces when the scale of the destruction became apparent and news of the brutality and massacres became public. But it’s what followed that effectively ended British rule in Ireland.

Within three days of the last shot being fired, more than 3,500 people had been arrested, most of whom had little to do with the Rising though they might have been involved in nationalist politics or the labour unions. 90 of these were identified as “rebel leaders” and a secret military tribunal held on May 2nd sentenced them all to death. On May 3rd, the executions began.

First the seven signatories of the Proclaimation of The Republic were shot in Kilmainham Jail, including James Connolly who was badly injured during the fighting and had to be tied to a chair in the jail’s courtyard to face the firing squad. Pádraig Pearse allegedly welcomed his execution which he saw as a blood sacrifice which would further the cause of Irish nationalism. By May 12th, fifteen of the 90 scheduled executions had been carried out and Irish popular outrage was growing. It was one thing to imprison the rebels, it was quite another to carry out mass executions without trial. When news reached the public that James Connolly – who had been a popular champion of the Irish labour union movement – had been carried out on a stretcher to be shot, it sparked street protests.

The last thing the British authorities wanted, just days after putting down a rebellion, was to precipitate another. And so, the remainder of the executions were cancelled (including that of Éamon de Valera who was to play such a central role in Irish politics for the next half a century). But the damage had been done. And the War of Independence was already brewing.