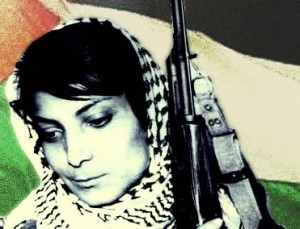 Today in 1969, and just twelve months after Women’s Libbers first burned a bra at an Atlantic City protest against inequality, a new kind of World Revolutionary was born when twenty-five-year-old Leila Khaled of the PFLP (Popular Front for the Liberation of Palestine) hijacked TWA Flight 840 en route from Rome to Athens. Accompanied by her PFLP comrade Salim Issawi, Khaled diverted the Boeing 707 east to Damascus, after first requesting that the pilot fly over Haifa so that the hijacker could view briefly the homeland she had, along with 750,000 other Palestinians, been forced to flee when she was four years old. At Damascus Airport, the passengers were exchanged for the release of 13 Palestinian prisoners in Israeli custody, after which the American airliner was destroyed with explosives by the two terrorists. But it was the subsequent worldwide publication of that iconic monochrome photo of Khaled – her beautiful face framed loosely by her cotton kaffiyeh, demurely clutching her AK-47 rifle – that immediately launched her into the same astral orbit as her own hero Che Guevara. And through that single revolutionary action, as Eileen Macdonald wrote in her book Shoot the Women First: “She shattered a million and one taboos overnight and she revolutionised the thinking of hundreds of other angry young women around the world.”

Five decades later, today living in Jordan and still utterly committed to her Palestinian cause, Leila Khaled continues to redefine our notions of a female revolutionary: “I no longer think it’s necessary to prove ourselves as women by imitating men,” she says. “I have learned that a woman can be a fighter, a freedom fighter, a political activist, and that she can fall in love, and be loved, she can be married, have children, be a mother.”