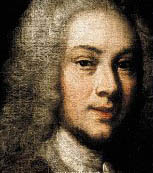 Today we celebrate the extraordinary scholar, philosopher, mystic and prophet, Emanuel Swedenborg, who left this world – just as he had predicted – two hundred and forty-four years ago today. Prophecy it was that brought greatest fame to Swedenborg, probably his most astonishing example of second sight occurring when – 300 miles away at a party in Gothenburg – he informed fellow guests that a great fire had broken out in his native Stockholm and would be extinguished just three doors from his own house. In every detail of the fire, Swedenborg was correct. Subsequently, he endeared himself to Sweden’s Queen Louisa Ulrike when, by disclosing information that only she could have known, Swedenborg brought her news of her deceased brother from the afterlife. But prophecy was just one of Emmanuel Swedenborg’s arsenal of talents, and, like T.C. Lethbridge, he only achieved his vision states when deep into his 50s, after a long working life of extraordinary scholarship and endeavour. Indeed, had Swedenborg not entered into these mystical states, he most surely would have been remembered as one of the great scholars of his age – bringing forth book upon book, tome upon tome; the width of his collective works must be measured on the shelf not by the inch but by the foot or even by the yard.

It is not the place of this On This Deity entry to lambast its readers with a seemingly endless inventory of Swedenborg’s works or feats of magic; rather we must understand that in Emanuel Swedenborg we find a rare, nay the rarest Gurdjieffian approach. That is, that by a combination of rigorous scholarly hard work and acceptance of the physical and the laborious solving of important State problems, the ever persistent Swedenborg “broke on through” to inhabit in his later years what appears to have been an almost permanent vision state. If it is true, however, that almost half a century before those visions commenced, Swedenborg – as has been claimed – transported six of King Charles XII’s warships across a fifteen-mile isthmus of land in only six weeks, then we can only conclude that for this great World Genius, the mystery and magic of his later life was even in his youth never more than a lightning flash away.