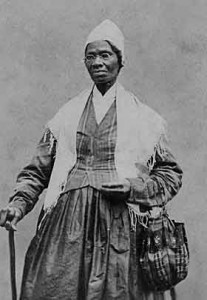 The impeccably (self-) named Sojourner Truth

Today we recall that extraordinary, incendiary moment when former slave, itinerant preacher, abolitionist and firebrand Sojourner Truth took to the podium at the 1851 Women’s Rights Convention in Akron, Ohio, raised herself to her full height of over six feet, and – pointing an accusatory finger at a bigoted minister – addressed the assemblage:

Sojourner Truth’s ‘Ain’t I A Woman’ – with its double-bladed message on the indignities of being both female and black – challenged America’s absurd desire to keep indoors and mollycoddle its white women. If women were indeed such delicate creatures, then what about black female slaves? If black female slaves ploughed and worked fields and bore children only to have them taken from them, where was the delicacy and protection offered to them? And if black female slaves had to endure the whip just the same as their black brothers, didn’t that suggest white women might well be capable of entering a carriage without the help of a man?

The impromptu speech ignited the women’s rights movement, its oft-repeated rhetorical question became a battle cry for future generations of women’s libbers. But Truth’s words of empowerment hold a unique and special resonance for black women. In 2009, when Michelle Obama unveiled a bust of Sojourner Truth at Washington’s Emancipation Hall, she said: “Just as Susan B. Anthony, Elizabeth Cady Stanton and Lucretia Mott would be pleased to know we have a woman serving as Secretary of State, I hope Sojourner Truth would be proud to see me – a descendant of slaves – serving as the First Lady of the United States of America.” The first black woman to be honoured in the US Capital, Truth is an international symbol of strong black women; she freed herself, and then fought indefatigably for the freedom of others.

Yes, there is debate about the accuracy of the account of Sojourner’s famous speech. As she never learned to read or write, it was left to others to record her words. On the occasion of the Akron Women’s Rights Convention, we have only a brief and overly dry report published a month later in the Anti-Slavery Bugle, and the recollections of Frances Dana Gage – the chair of the convention – written twelve years after the fact. Yes, Frances Gage – a talented radical feminist writer – would more than likely have heightened the drama of Truth’s words. But does it matter? Elizabeth Cady Stanton and Susan B. Anthony thought not, and it’s Gage’s version of Sojourner Truth’s speech that the leaders of the women’s rights movement appropriated in 1881 for the first volume of their authoritative and groundbreaking compendium, The History of Woman Suffrage. Through this route, Truth has come to fill the crucial role of strong black female icon for generation after generation.

With ‘Ain’t I a Woman’, Sojourner Truth forced America to confront its convenient, widely-held notions that slaves were male and women were white, illuminating a fact that still – in the early twenty-first century – demands repeating: among blacks there are women; among women, there are blacks. For as long as black women remain among the most oppressed of all humans, Truth’s legend must and will endure.

She was a hell of a woman.