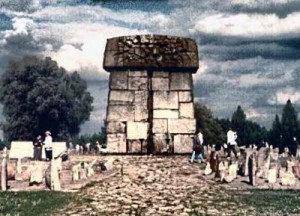 When people blithely wonder how millions of Holocaust victims went to their deaths without resisting, they display a total ignorance of the impeccable organisation, military might and web of deception behind the Nazi’s Final Solution. While there were multiple ghetto uprisings and a widespread network of Jewish partisans operating throughout World War Two, so brutally systematic and efficient were the death camps that – once trapped within their evil confines – organised resistance was virtually impossible. Today we recall an extraordinary exception.

Like all of the other death camps, Treblinka adhered to a strict routine that supported the ruse of resettlement in order to feed hope and eliminate the chance of Jewish rebellion. Upon arrival, those spared immediate extermination in the gas chambers were transferred to the forced labour compound, where between 700 and 1000 prisoners at any time, nearly all Jews, were given the unimaginable task of aiding the smooth running of the extermination process. But somehow, within this Hieronymus Bosch-like realisation of Hell, a dream of resistance and revenge was hatched.

The initial plan was to set fire to and destroy the entire camp, for which the prisoners were willing to sacrifice their own lives. But that changed when Jews from the recently fallen Warsaw ghetto began to arrive with “grenades and weapons in their pockets instead of tears in their eyes.” The incredible stories of the ghetto’s uprising allowed the Treblinka prisoners to dare to imagine their own survival in their revised plan: seize arms from the camp’s arsenal, set fire to the camp, escape in the ensuing chaos.

By luck, a locksmith from within the rebel group was asked to repair the door of the camp’s arsenal and was able to obtain a wax impression of the lock. After four months, he’d fashioned a working key. Gasoline was also secured, which would replace the contents of the apparatus of the prisoner whose task it was to walk around the entire camp spraying disinfectant. With access to the arsenal and a means to ignite the camp, the date for the revolt was set for 2nd August.

What happened on that day is best described by the firsthand testimony of two survivors:

“At 3:45 p.m. we heard the signal – a rifle shot near the gates of the Jewish barracks. This shot was followed by the detonations of hand grenades hurled at previously “disinfected” objects. An enormous fire broke out in the whole camp. The arsenal exploded and everything was burned, except the “bath” cabins, because it proved absolutely impossible to get near them. The victim of the first shot was Obersharführer Kittner, the chief of the guards and the leading camp spy. The flames devoured all the storerooms for clothes and shoes. Of the 700 workers on the campgrounds, only 150 to 200 succeeded in escaping; the others perished in the camp as well as over 20 Germans. Of the 150 to 200 who managed to escape, only 12 are still alive; the others were later murdered by the German hangmen.” – Samuel Rajzman

“It is night. The fight has already lasted 6 hours. The Germans have received help and our numbers are fewer and fewer. There is a lack of ammunition. Our duty is done. We destroyed the camp and the murderers are dead. We killed 200 German and Ukrainian fascists. We received the order to escape to the forest. Most of the “fighters” were killed. Many Germans were also killed. From among us only a few survived.” – Stanislaw Kon

Most of the leaders of the revolt were shot and killed before they could escape from the camp. Those who got beyond the barbed-wire perimeter were relentlessly pursued by the SS and local police and killed on the spot. The gas chambers survived the revolt, and would continue to function until its last victims were claimed three weeks later. The camp would struggle on for a few more months but, almost entirely destroyed, it was dissolved by the end of November 1943. Only 60 of those who endured the horrors of Treblinka would still be alive at the end of the war.

Although the casualties suffered were vast, the Treblinka Revolt miraculously succeeded in destroying the notorious death camp. The Jewish prisoners, having rightfully concluded that they were going to die in any case, chose instead defiance. I can think of no greater act of heroism.