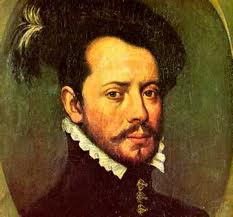 Hernán "What a Killer" Cortés

“He came dancing across the water with his galleons and guns, Looking for the new world in that palace in the sun”- from Cortez the Killer by Neil Young

Hernán (Hernando) Cortés was a glory-seeking, ruthless murderer capable of barbaric cruelty, who more or less single-handedly destroyed the ancient Aztec culture. Using terror tactics, guns and horses he ‘conquered’ Mexico and unknowingly, with his small band of men, spread European diseases such as smallpox, measles and Catholicism to the indigenous peoples of Mexico who had no natural immunity. Today, the anniversary of his death, we remember him as a warning from history.

Born in 1485 in Spain into a family of minor nobility, he quit his legal studies aged 16 to go adventuring. Excited by tales of the exquisite treasures to be plundered in the New World he set sail for Santo Domingo in 1504 and got to Cuba by 1511. It was here, alongside conquistador Diego Velázquez, that he built his reputation for cunning, daring and learned the art of war-mongering.

Defying Velázquez’s orders, in 1518 Cortés sailed to Mexico, which had only very recently been discovered by Europeans. He wanted to be a conquistador, make a name for himself, claim the land for Spain, grab some gold and convert some natives to Christianity. And he had The One True Christian God on his side!

He landed at what is now Veracruz, in Mayan territory, with about 10 ships, a few hundred men, no more than 20 horses and a dozen cannons and established a settlement. The Mayan people, a decentralised farming civilisation, had never seen anything like it before. Massive ships! White men wearing strange clothes! Huge animals on which a man can ride! And very big, loud guns capable of extraordinary damage. Such was the shock of the invasion the frightened local people formed alliances with Cortés who found he could do anything and take anything he wanted. The Mayans told of him the riches of the neighbouring Aztec empire. And boy-oh-boy, he fancied some of that! He would march on the capital Tenochtitlán, ruled over by Emperor Montezuma II, and he would conquer it.

Before he left he scuttled all but one of his ships so that the men remaining at the new settlement couldn’t mutiny and bugger off back to Spain while he was away. There was to be no going back.

As he travelled he took advantage of regional enmities, inciting communities who feared the Aztecs to rise up and come with him. En route he converted people to Christianity. That turned out to be pretty simple: the indigenous people simply added a new god to their Holy catalogue of deities.

After two months on the road Cortés’ men, now numbering thousands, reached the city of Cholula. There he massacred tens of thousands of unarmed people to both frighten the Aztecs waiting for him in nearby Tenochtitlán and to warn his own men that such brutality would be meted upon them if they rebelled. The city was torched. Cortés marched on towards Tenochtitlán. Some say his arrival outside the city co-incided with an Aztec prophecy about the coming of white-skinned men. This might explain Montezuma’s generous welcome of Cortés – or more likely, scouts from Cholula had already informed him of Cortés’ brutality and the welcome was an attempt to appease him.

In November 1519 Cortés arrived in the bountiful, complex and watery city of Tenochtitlán. He was received by Montezuma dressed in feathers and gold, who lavished gifts upon the Spaniard. The good will wouldn’t last. Cortés’ superior fire power and barbarism meant that Montezuma was always doomed, despite the city’s lakeside defences. Montezuma was taken hostage. To cut a two-year-long story short, there were massacres, appeasements, skirmishes, truces and finally a siege – but the end was inevitable. By August 1521, Montezuma was dead, the Aztec empire was history and Cortés claimed Mexico for Spain. Cortés personally governed the territory from 1521 to 1524 from Mexico City, newly built from the ruins of the once-glorious Tenochtitlán.

Once conquered, the indigenous people were brutalised, exploited and died in their thousands from wave after wave of European diseases. An account written in 1528 describes the scene after Cortés’ conquest: “The houses are roofless now, and their walls are reddened with blood. Worms are swarming in the streets and plazas, and the walls are splattered with gore. The water has turned red, as if it were dyed, and when we drink it, it has the taste of brine. Our city is lost and dead. We have chewed dry twigs and salt grasses, we have filled our mouths with dust and bits of adobe, we have eaten lizards, rats and worms….” You get the idea.

Later in his murderous career Cortés would explore Central America hoping to find a strait from the Atlantic to the Pacific. He did not. Instead he discovered the territories of what he called California, a name he chose from a popular early 16th-century novel and a word first printed on a map by Diego Gutiérrez in 1562. The name stuck. In 1541 Cortés returned to Spain and retired to an estate near Seville where he died on 2 December 1547.

Mexico would not be an independent self-governing state until August 1821.

“He came dancing across the water, Cortez, Cortez, What a killer.” – Neil Young

8 Responses to 2nd December 1547 – the Death of Hernán Cortés