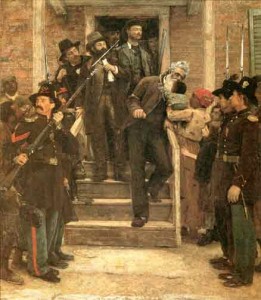 John Brown on his way to the gallows and martyrdom

Today we honour a controversial World Martyr. A man so fervently opposed to racism that he was willing to die for it… but also to kill for it. A white man who killed white men – and sacrificed his own life – in order to free four million black people. For it was on this day in 1859 that John Brown – the legendary meteor who sparked the American Civil War – was hanged in the state of Virginia for the crimes of his one-man “Holy War”.

Six weeks earlier, immediately following his audacious raid on Harpers Ferry, John Brown was imprisoned in Charles Town, Virginia, charged with murder, treason and inciting a slave insurrection – all three crimes punishable by death. Even more so than the raid itself, the trial of “one bold man … defending his rights in good earnest” caused a national sensation, arousing and intensifying the bitter divide between North and South. Intellectuals, poets and journalists – led by the Transcendentalists in the North, and Victor Hugo in France – began to write about John Brown as a Christian hero, a martyr, a man who would do that which even Frederick Douglass wouldn’t dare in order to eradicate slavery. The South, meanwhile, withdrew even further into defending its ‘traditions’ and deepened its hatred and suspicion of the North.

The trial of John Brown lasted three and a half days. The jury deliberated for just forty-five minutes before returning a guilty verdict on all three counts; the judge, without hesitation, sentenced death by hanging. With evangelical zeal, Brown accepted his fate. On the morning of his execution, he prophetically wrote: “I, John Brown, am now quite certain that the crimes of this guilty land will never be purged away but with blood. I had, as I now think, vainly flattered myself that without very much bloodshed it might be done.” Escorted by a full 3,000 soldiers to ensure there was no chance to escape, Brown was led to a small field where the gallows and martyrdom awaited.

In the aftermath of the execution, Henry David Thoreau asserted that “[Brown] is more alive than he ever was. He has earned immortality … He is no longer working in secret. He works in public, and in the clearest light that shines on this land.” And indeed it would prove that the words and deeds of this one man, above all else, hastened the advance towards secession, war and – eventually – emancipation.

John Brown was a deeply religious man who believed it was his divine mission to abolish slavery. It is both disturbing and inspiring what this avenging angel was willing to do to achieve justice; even before Harpers Ferry, Brown’s ruthless actions in Bleeding Kansas earned him the reputation of a homicidal madman. The paradox that America needed to be morally rescued by a murderous freedom fighter has, inevitably, created for John Brown a thorny legacy. But, however fanatical his methods, history has proved that Brown was not mad. He was right.

One Response to 2nd December 1859 – the Martyrdom of John Brown