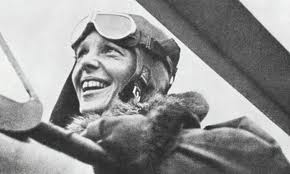 “Never interrupt someone doing what you said couldn’t be done.’ – Amelia Earhart

“…first lady of the skies,  she had no guy holding her down, no one could clip her wings, she was no bird in the hand, she is no living thing now…” from the poem ‘Amelia Earhart’ by Patti Smith

When 10-year-old Amelia Earhart saw an aircraft for the first time at the 1907 the Iowa State Fair, she wasn’t impressed. Her passion for flying was not ignited until December 1920, when she visited an airfield with her father who paid $10 for Amelia to have a 10-minute flight. It would change her life. “By the time I had got two or three hundred feet off the ground I knew I had to fly,” she said.

Then, as now, learning to fly was hugely expensive. But Amelia was determined and took any job she could lay her hands on to earn the money to train. She found pioneer aviator, engineer and mechanic Anita Snook and asked her: “I want to fly. Will you teach me?” She cropped her hair, pulled on a leather jacket and took to the skies. Just eighteen months later she bought a Kinner Airster biplane and by October she’d flown it to 14,000 feet, then a world record for women pilots. It was to be the first of many firsts for Amelia.

In May 1927 Charles Lindbergh made the first solo trans-Atlantic flight. The following year, sponsored by a publishing company, Amelia became the first woman to fly across the Atlantic. But it wasn’t solo and it was mostly flown on instruments. “I was just baggage, like a sack of potatoes … maybe someday I’ll try it alone.”

Nevertheless, she was now a celebrity. Her lecture tours and product endorsements would finance her flying. She used her role model status to campaign for numerous causes including promoting commercial air travel, women’s rights and women in engineering and other so-called ‘traditional’ male careers.

Later in 1928 in another ‘first’ she flew solo across the North American continent and back. She also got married that year, to George Putnam, in a union of equality with shared responsibilities. Most notably she kept her own name and was never referred to as Mrs Putnam.

The day when she would at last “try it alone” came in May 1932 she took off from Newfoundland in a single-engine Lockheed Vega 5B and headed east out over the Atlantic towards Paris. Battling icy conditions, strong winds and mechanical problems, after nearly 15 hours ain the sky she landed safely in a field near Derry, Northern Ireland. A farmhand asked: “Have you flown far?” “From America,” she replied. It wasn’t Paris, but who cared? She’d done it anyway.

Amelia’s fame flew to still higher altitudes and she became friends with the rich and powerful, including US First Lady Eleanor Roosevelt with whom she shared interests in social justice, women’s rights and civil rights.

More flights followed. The first to fly solo from Hawaii to California. The first non-stop from Mexico City to New York. Her legendary achievements, pioneering spirit, cool-headed courage, independence and dignity were already enough to secure her place in history. But Amelia had an even bigger ambition. She wanted to be the first person to fly the 29,000 miles around the world at the equator.

In preparation for her epic global circumnavigation, her Lockheed Electra 10E was fitted with extra large fuel tanks for the tricky transoceanic crossings. She set off on 20 May 1937 from California with experienced navigator, Frederick Noonan. Flying east, with stops over South America, Africa and Asia, by the end of June they’d reached New Guinea having flown 22,000 miles. The Pacific Ocean was always going to be the toughie. With thousands of miles of nothing except only a few tiny islands, any navigational error, fuel shortage or technical fault would be fatal. And so it was. On 2 July she and Noonan took off from New Guinea on a planned mammoth 18-hour, 2500-mile leg to reach Howland Island, a minuscule uninhabited atoll, where the US government had constructed an airstrip and laid supplies for her. The US Coastguard ship Itasca was cruising nearby to maintain radio communications and help them navigate in the Pacific’s vastness.

As the plane approached Howland she reported being low on fuel and unable to see the island despite, she believed, being in the right position. Flying in a methodical zigzag to try to see the atoll, she radioed: “We are running north and south” and then the Itasca lost contact. She never landed at Howland. The Itasca searched for two weeks for any trace of the world’s most famous pilot, but nothing was ever found.

In her song ‘Amelia’, Joni Mitchell sang: “A ghost of aviation, She was swallowed by the sky, Or by the sea, like me she had a dream to fly”. Amelia would go on to inspire generations of women and girls to do the things they loved, and no matter what the risks, to do them the very best they can. Chocks away, Sisters!