2nd May 1919 the Death of Gustav Landauer 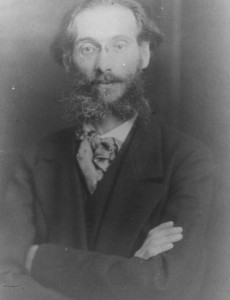 Today we are remembering one of the great lost thinkers of the twentieth century – Gustav Landauer – German Jewish anarchist, philosopher and “prophet of community” who, on this day in 1919, was brutally murdered by counter-revolutionary soldiers who overthrew the Bavarian Council Republic – that brief attempt to push through libertarian socialism amidst the turmoil of post-World War I Germany. Arrested and dragged into the courtyard of Stadelheim Prison, Landauer was surrounded by White troops who, determined to finish off the “Dirty Bolshoi,” descended on him with their rifle butts and trampled him to death. After the Nazis were elected in 1933 they destroyed Landauer’s grave, erected in 1925, and sent his remains to the Jewish congregation of Munich – charging them for the costs.

It was a tragic end for a man who, in his time, was a highly regarded literary critic, translator and scholar, a close associate of the great Jewish philosopher Martin Buber, editor and writer of Der Sozialist – the mouthpiece of the Socialist Federation – and one of the leading European theorists of anarchism. In recent years academic and author Jesse Cohn suggested: “If there were any justice in this world – at least as far as historical memory goes – then Gustav Landauer would be remembered, right along with Bakunin and Kropotkin, as one of anarchism’s most brilliant and original theorists.” Historian Paul Avrich wrote, “He was … the most influential German anarchist intellectual of the twentieth century.” And in 1893, the German police described him as “… the most important agitator of the radical and revolutionary movement in the entire country.”

So how has Gustav Landauer come to be all but forgotten?

Landauer’s concept of socialism was definitely not Marxist, nor even Bakuninist – and has subsequently been repressed by the guardians of orthodox Marxism. Eschewing revolution, Landauer instead believed that the state could be destroyed only by building libertarian communities that would release us from our childlike dependence on authority. A mystical philosopher, he was committed to the spiritual rejuvenation of humanity and a prophet of Gemeinschaft – the German concept of organic community versus the atomized state: “My house, my front garden, my wife and children — my world! On this feeling, on this exclusive solidarity, this voluntary union, this small and natural community, all larger organisms arise.” Landauer’s ideas of “folk consciousness” would make their greatest impact on the Jewish radicals of the early twentieth century, and his concept of agro-industrial gemeinschaft communities would be instrumental on what we now recognise as the kibbutz movement.

Landauer’s utopian vision of socialism with its communities, free schools and cooperatives was sidelined by World War I and its aftermath. As revolution spread throughout Germany in 1918-1919, a radical socialist government supported by workers and peasant councils took power in the state of Bavaria and, under the leadership of Jewish socialist Kurt Eisner, declared itself an independent republic. Ever the idealist, Landauer praised the councils as heralding a new age of “action, life and love.” At Eisner’s invitation, he became the Commissioner of Enlightenment & Education. Landauer planned to introduce the radical ideas of education pioneer Francisco Ferrer, open the University of Munich free to all 18 year olds, abolish exams and pledged that “every Bavarian child at the age of 10 is going to know Walt Whitman by heart.” But, instead, Eisner was assassinated, Bavaria was thrown into chaos, and the peace-loving Landauer unwittingly found himself embroiled in a violent power struggle that rendered him a marked man.

Of equal tragedy to that of his death, history has abetted the crime of Gustav Landauer’s murderers, burying his work in obscurity. It’s been our loss. He was a bold, brilliant thinker who warned of the grim future under capitalism, as well as the dangers of dictatorial socialism, with preternatural prescience.